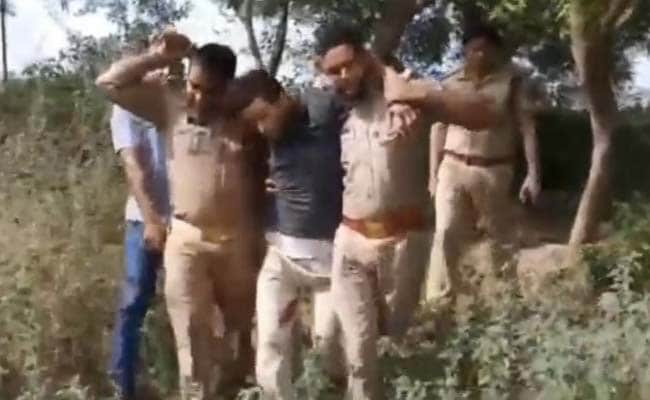 She met him in his hometown of Ludhiana. For a few weeks, he captivated her until the wealthy teenager escaped from Punjab to Uttar Pradesh to be with him.

Yesterday it was confirmed that the 19-year-old girl from Punjab, whose family owned a large taxi business, had been murdered a year ago with her body abandoned in a field near Meerut. His head had been removed; also his arms; the tattoos on them would have revealed his identity.

Mohammed Shaqib, the man in his 20s, who had claimed he would marry Ekta Jaswal, was arrested yesterday along with five other members of his family, including two women. Gold, cash and the victim’s mobile phone were found with Shaqib.

Jaswal’s enraged family attacked Mr. Shaqib at a press conference last night in Meerut that had been organized by the police. Later, the police took Mr. Shaqib to the place where Ms. Jaswal’s head and hands were allegedly abandoned. Police say he tried to escape after snatching a policeman’s revolver and was shot three times in the legs. He is currently in the hospital.

Earlier last year, police say, Shaqib persuaded Jaswal to move to Meerut. When he panicked because she was close to finding out who he really was, he killed her, they say. In an act of further depravity, he used his phone to share previous photos of her on his social media accounts to make it appear that she was alive and well.

“They beheaded her and also cut off her hands so that they did not recognize her. She had tattooed the name of the accused on her arms. The girl’s mobile phone was recovered. The accused kept the girl’s WhatsApp account active and used it to continue changing their display images, giving the girl’s relatives the false impression that she was alive and well, “said Ajay Sahni, the Meerut police chief.

When a female headless body was discovered in June last year, it took several months for the police to realize it was that of Ms. Jaswal. Cell phone records warned them. Teams then traveling to Punjab reviewed the records of missing persons (Ms. Jaswal’s family had reported their disappearance but had not followed up on the case). Finally, the police connected the dots. Ms. Jaswal’s family said they did not approve of their relationship, but assumed that she was alive and healthy due to her activity on social media.

Police say Mohammed met with Ms. Jaswal on frequent visits to Ludhiana, where he pretended to be a devout Hindu. A few weeks later, Ms. Jaswal left her family’s home in Ludhiana with cash and family jewels worth Rs 25,000. After arriving in Meerut, she began living with the man she knew as Aman.

He and his family wanted to grab the cash and jewelry that she had brought. According to the police, Jaswal received a cold drink with sedatives before she was dragged into a field and killed.