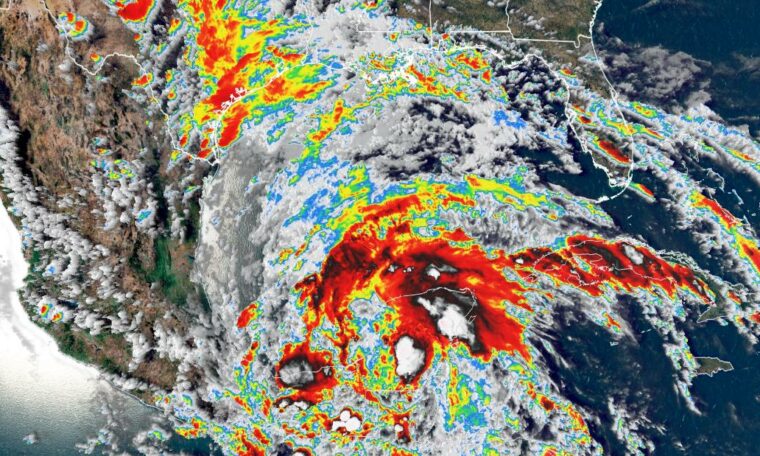 Tropical Depression Three formed in the southern Gulf of Mexico on Monday afternoon, according to the National Hurricane Center.

The system is located in the Bay of Campeche, in the southernmost part of the Gulf of Mexico, about 50 miles west-southwest of Campeche, Mexico.

Maximum winds with TD Three are currently 30 mph, but they are expected to strengthen in the coming days, as the system brings heavy rains to parts of Mexico.

Tropical Depression Three is forecast to become a tropical storm on Tuesday.

“If this occurs before Friday, it will be the earliest of the year for a third named storm registered in the Atlantic basin,” says CNN meteorologist Brandon Miller.

Researchers Predict Up To 19 Named Storms This Hurricane Season >>>
Two tropical storms Arthur and Bertha formed in May.

“Warmer than normal ocean temperatures in the Atlantic are part of the reason this season started early,” said Miller. “It appears that another system is forming this week in the Gulf of Mexico, where ocean temperatures are 1-2 degrees Fahrenheit above average.”

Tropical Depression Three was once Tropical Storm Amanda, which quickly formed across the eastern Pacific over the weekend, but has since dissipated in Central America and southern Mexico.

“Although this system originated from the remnants of tropical storm Amanda, it will receive a new name, probably Christopher, simply because it moved from the Pacific Ocean basin to the Atlantic Ocean basin, through Mexico,” said the CNN meteorologist Allison Chinchar. .

In the short term, little movement is expected, as this system is shaking over southern Mexico, bringing heavy rains, flash floods and landslides to the region. In the long term, this storm could hit the Gulf of Mexico over the weekend, making it our third tropical Atlantic storm named Cristóbal of the season.

“Under the constant shadow of the coronavirus pandemic, this year’s hurricane season will be remarkably challenging, especially if a high-impact event hits the ground. With already limited resources and limited supplies, now is the time for people to prepare for the active season which is forecast, “said CNN meteorologist Derek Van Dam.