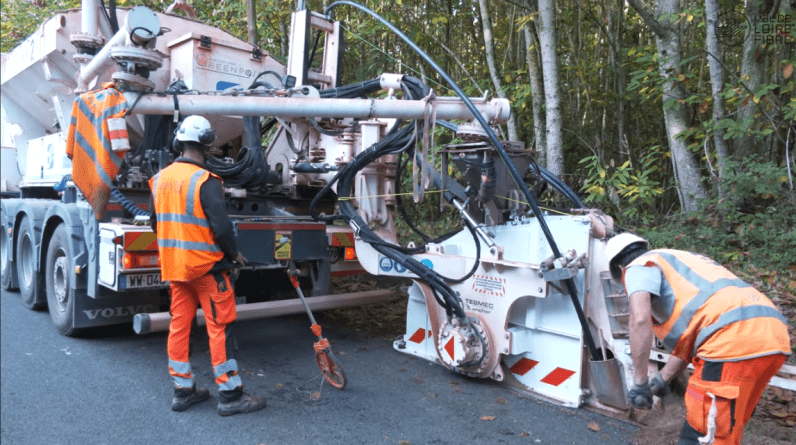 Fiber runs along our roads, sometimes visible on poles but sometimes hidden underground. Infrastructure operator TDF has established a partnership with civil engineering firm OT Engineering to deploy a new technique in the Loire Valley to bury fiber cables in an environmentally friendly way compared to traditional fiber deployment.

The technique, known as greenpose, consists of placing a binder mixed with earth instead of concrete. In an explanatory video, infrastructure operator Continvoir presents the Greenboss site, which represents nearly 7 kilometers of civil engineering in the municipality. OTE will be able to use its system developed over the last three years to bring fiber to about 600 people by the end of the year.

On this site, it is advantageous to treat the floor by directly using materials already on the site, which are treated with a binder. The operation is very easy to understand: a reel holder unwinds the tubes containing the fiber at the front of this mobile construction site and a truck responsible for four operations arrives. He digs the trench, treats the cuttings, then places casings in the bottom of the excavation and backfills it directly with earth to which this famous binder has been added. A third vehicle equipped with a compact wheel takes care of packing the trench to be cleaned later by a sweeper and a small excavator. The site uses 3 machines instead of 5.

In the video, the OTE manager explains the many benefits of this practice. Greenbos’s first point and environmental contribution allows us to reduce our carbon impact by 95% compared to the conventional method, which means that 33 tons of Co2 are saved per kilometer of fiber used. “These savings are made possible by the absence ofBrooms of mixer trucks gravitate around the traditional building site“There is no waste to remove or clean up and the use of concrete is greatly reduced compared to the traditional method.

The safety of the users is also highlighted as the ditches are not open on the edge of the road. In addition, this technique allows very fast processing speeds of up to 350 meters per hour of fiber deployment. In the Val de Loire Fiber RIP, operated by TDF, the objective is to produce 200 kilometers of fiber deployed using Greenboss technology.