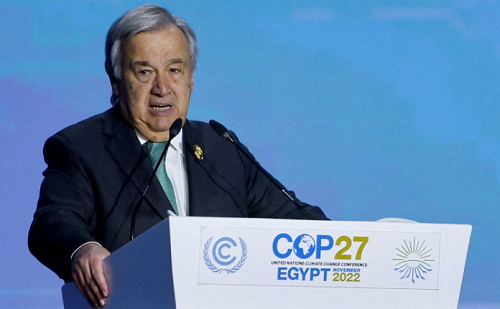 United Nations Secretary-General Antonio Guterres on Sunday lamented the failure of the Climate Conference of the Parties (COP 27) in Egypt’s Sharm el-Sheikh to produce a plan to drastically reduce emissions.

“Our planet is still in the emergency room […] “We must now drastically reduce emissions, a question this COP does not answer.”At the end of the climate conference, Mr. Guterres regretted it.

“What we have here is one step too short for the planet’s inhabitants. Major emitters are not making enough additional efforts to increase and accelerate their emission reductions.”For his part, the Vice-President of the European Commission, Franz Timmermans, announced.

A resolution on developing countries’ demand for compensation for loss and damage caused by climate change was unanimously adopted at a closing meeting on Saturday after two weeks of hard-fought negotiations by countries participating in COP27.

Meanwhile, Xie Zhenhua, China’s ambassador for climate, estimated that the funds would benefit all developing countries, but would go to weaker countries first.

A special committee will determine the terms for the implementation of this specific financial fund, with the aim of endorsing them at COP-28, scheduled for the end of 2023 in the United Arab Emirates.

The conference adopted a final declaration to rapidly reduce greenhouse gas emissions and reaffirm the goal of limiting global warming to 1.5°C.

The text is also inviting “Accelerate efforts to phase out carbon use without (CO2) capture and eliminate inefficient fossil fuel subsidies”. (with MAP)