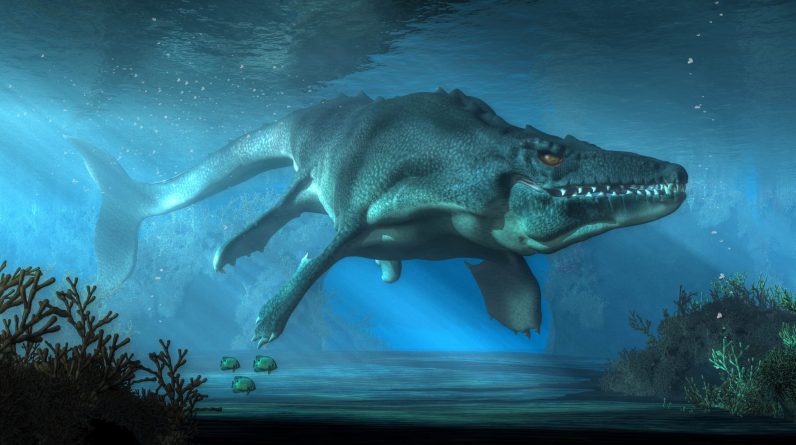 A sea monster similar to the Komodo dragon

This specimen of sea monster found in Morocco was part of the mosasaur family that dominated Earth’s oceans during the late Upper Cretaceous period, 70 to 65 million years ago. The first specimen of this family of super-predators of the seas was discovered in 1770 in a limestone mine near the Meuse in the Netherlands. The name Mosasaurus also means “lizard of the Muses”.

The The mosasaurs Not dinosaurs, but marine reptiles with large, heavy, oval-shaped jaws armed with many sharp, pointed teeth.

The dimensions of these sea monsters are impressive: some specimens are 15 to 17 meters long. With such a size and powerful jaw, mosasaurs were at the top of the food pyramid. Like modern whales and dolphins, they adapted to life in water and lived permanently, but they had to come to the surface to breathe air.

These massive and powerful sea monsters had large eyes, but their binocular vision was poor and their sense of smell was poorly developed.

These marine reptiles lived only 5 million years, which is nothing compared to the dinosaurs who dominated the earth for 184 million years!

A new species that attacks its allies

With such teeth, this sea monster was at the top of the food pyramid
Credits: Scott Cope UK/Shutterstock

The new species discovered in Morocco are called Thalassociton atrax, looked like a giant Komodo dragon with shark fins and a tail. The sample was taken from the Ouled Abdoun basin in Morocco.

During the Middle Cretaceous period, this part of the world began to be covered by water, which over time led to the formation of rich sedimentary deposits. Many species of marine vertebrates were buried as fossils at a depth of about ten meters.

Towards the end Cretaceous Elevated, the waters covering this part of the world were rich in nutrients from the ocean floor, pushed to the surface by ocean currents. The ecosystem thrived and predators loved it Thalassociton atrax Able to swallow large amounts of food.

With this length of 9 meters, it was smaller than its mosasaur cousins, but it had a large head of 1.3 meters. It had a short nose and powerful jaws with massive, conical teeth. Powerful muscles attached to the back of the skull suggest that this animal was adapted to attack and tear large prey.

Paleontologists have also found partially digested bones of other types of mosasaurs and plesiosaurs. These bones actually show traces of the action of a digestive juice, meaning they were attacked and swallowed by a predator. Researchers can’t prove it now Thalassociton atrax Who is responsible for that, but his profile fits perfectly.

read more: Ichthyosaur was the first giant animal to live on Earth

Such a development Dinosaur rex

Amazingly, paleontologists have observed that the evolution of mosasaurs is similar to that of another top predator, the land-dwelling Tyrannosaurus. These two predators began to diversify and grow larger and larger about 90 million years ago.

Almost 4 million years after the common evolution of these two large carnivores, mass extinctions begin on Earth due to extreme global warming. Volcanic activity is very intense at that time and volcanoes emit large amounts of carbon dioxide into the atmosphere, creating a powerful greenhouse effect. Among the animals that disappeared following this mass extinction were large predators such as plesiosaurs and allosaurs.

See also  The Arctic Ocean is acidifying in fourth gear

Empty spaces that allow mosasaurs as they disappear and Tyrants To settle there, one on seas and the other on land. This proves that the evolution of these two predators caused, among other things, the mass extinction.

When he lived, Thalassociton atrax Not the only representative of his family. A dozen species of mosasaurs lived in its company in the waters off present-day Morocco. Plesiosaurs, giant sea turtles, ammonites, fish, molluscs, and crustaceans lived in the seas with thousands of species.

Earth’s collision with the 10-kilometer-wide asteroid Chicxulub will cause most life on Earth to suddenly and permanently disappear. Anyway, mosasaurs don’t live there!

read more: The extinction of the dinosaurs happened in spring