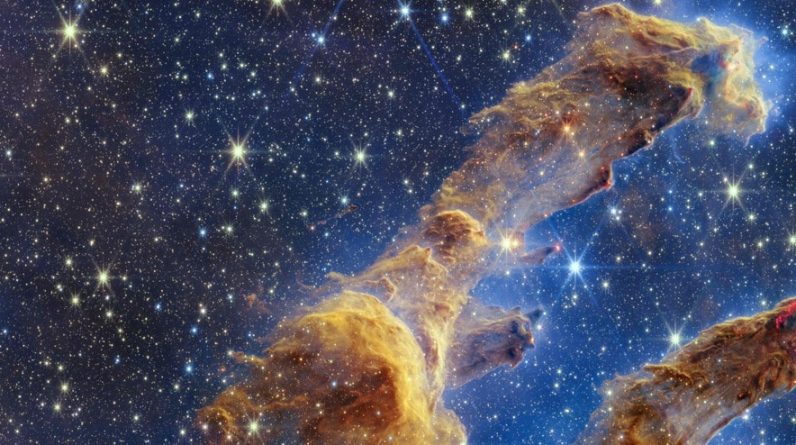 The highly anticipated film is as classy as expected. The James Webb Telescope on Wednesday revealed the first view of the ‘pillars of creation’, giant structures of gas and dust with stars forming.

• Read more: Astronomers were fascinated by the never-before-observed brightness of space light

The twinkling of thousands of stars illuminates the whole image, in which these gigantic brown and orange columns stand in the vastness of the universe.

At the end of many of the pillars are intense red areas of rising lava. These are “outflows from stars still in the process of development,” NASA explained in a press release, only a few hundred thousand years old. These “young stars periodically eject supersonic jets that collide with these thick pillar-like clouds of material.”

The “Pillars of Creation” are located 6,500 light-years from Earth in our Milky Way galaxy. Specifically, they are found in the Eagle Nebula.

They were popularized by the Hubble Space Telescope, which took the first snapshot in 1995, followed by a recapitulation in 2014.

But thanks to its infrared capabilities, the James Webb Telescope, launched into space a year ago, is piercing the opacity of the pillars, producing many new stars — brilliant red balls.

James Webb, science program manager at the Space Telescope Science Institute, which operates the telescope from Baltimore, along with Klaus Pontoppitan, tweeted Wednesday that “by popular demand, we had to build the pillars.” “There are many stars!”

The image, about eight light-years across, was taken by the NIRCam instrument, which operates in infrared, a wavelength invisible to the human eye. Thus, the colors of the image are “translated” into visible light.

See also  Mathematics has been declared racist in the United States

According to NASA, this new image “will help researchers revise their star formation models, identify a more accurate number of newly formed stars, as well as determine the amount of gas and dust in this region.”

James Webb, whose first color images were released in July, is conducting its observations 1.5 million kilometers from Earth.

One of the main objectives of this $10 billion telescope is to study the life cycle of stars. Another important line of research is the study of exoplanets, i.e. planets outside the solar system.