Home Science How is a quantum computer made? 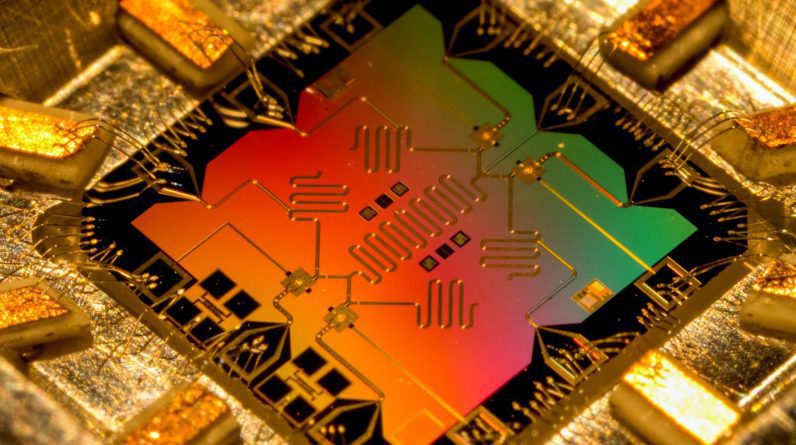 What does it take to build a quantum computer? Various materials are very delicate to manipulate, experimental quantum optics researcher Aymeric Deltiel explains in a talk.

2022 Nobel Prize in Physics Now credited to three pioneers of quantum information, including a Frenchman, Alain Aspect. Their work laid the groundwork for the “second quantum revolution,” which enabled us to dream of the consciousness of a quantum computer.

Indeed, quantum computing is making more and more noticeable appearances in the general press, and many readers can deduce from this that humanity already has tools capable of beating our good old computers.

In fact, based on the basic principles of quantum physics, researchers and industrialists Combine their efforts to achieve the ultimate quantum computer called “Universal”.. While it is true that recent achievements in this field are as impressive as they are promising, to date, The largest quantum computer is reported to have 127 “quantum bits”.It should be understood that the latter is not designed to perform useful calculations, but “proof of concept”.

So, at present, a functioning universal quantum computer remains an unreachable holy grail whose success no one can predict with certainty.

On the other hand, we are already on the verge of having tiny quantum machines called “quantum simulators” that could be useful. To solve specific problems Physics, Engineering, Chemistry or Pharmacology.

What would a universal quantum computer allow?

For example, factoring numbers down to a few hundred digits, such as those used to secure our communications, would take thousands of billions of years on a sophisticated supercomputer, but it takes. A normal-sized quantum computer only takes a few hours To solve this problem.

Building a quantum computer is a big challenge

It is still necessary to build a quantum computer that works with transparently designed quantum algorithms.

A quantum computer is a machine that consists of “qubits” – the quantum equivalent of “bits”, the units of classical computation – and allows us to manipulate them to perform the operations required by an algorithm. Therefore, qubits must obey the laws of quantum physics.

So the first candidates for the role of the qubit are individual quantum particles. Indeed, we now know how to control individual atoms with lasers, ions with electromagnetic fields, and electrons with nanometric circuits.

We can also use particles of light, because today we know how to emit photons one by one – “single” photons. For this, we use “Semiconductor Quantum Dots”Deficiencies are checked for example in diamondOr even are called “non-linear” crystals.

A final option is to use qubits Superconducting circuits : These are millimeter-scale electronic circuits, much larger than the quantum particle-based sensors discussed above. They offer the advantage of being able to be integrated into a chip using techniques similar to the manufacturing of conventional computers. This is the path chosen by the computer giants Google And IBM.

What is the “Second Quantum Revolution”?

The many physical systems that could make a quantum computer possible result in a great deal of research in all these fields, which are progressing in parallel. This control of individual particles is now called the “second quantum revolution” – technologies based on collections of first quantum particles: lasers, transistors, superconductors, which changed our world forever in the second half of XX.e century

Despite this progress, control of these qubits is more difficult than classical bits, due to the large weakness of quantum effects. In fact, the environment of the particles (ie heat, light, electric and magnetic fields) always ends up disturbing the superposition states.problem. This phenomenon, known as “decoherence”, practically limits the manipulation and storage of information in qubits.

Worse… the more qubits the system has, the faster this perturbation will occur. For these reasons, current prototypes are made in extreme environments: extremely low temperatures (a few fractions of a degree from absolute zero), ultra-high vacuum, total darkness. These highly controlled conditions, achievable only in the laboratory, make it possible to preserve quantum effects for a limited period of time, but not long enough to actually work.

However, at present, no one can build such a computer and predict that it will one day exist.

Nevertheless, in the quest for a universal quantum computer, new ideas have emerged.

The first quantum computers will be very different from the omnipotent computers initially envisioned and will be designed to perform a very specific task, arguably creating a more efficient way to achieve it.

There are many applications considered, for example optimization of distribution networks, understanding Mechanisms of photosynthesisdesign Fertilizer catalystsof Medicinesi’Battery optimization Or Solar cells.

To illustrate this principle with a concrete example, an Australian team this year is a A tiny processor based on ten qubits In silicon, by trapping electrons between nanometric electrodes. This quantum circuit was designed to simulate polyacetylene molecules, a molecule of great interest in fundamental physics. Because it creates a complex theoretical physics problemand was awarded the Nobel Prize in Chemistry in 2000.

In this efficient achievement, the size of the simulated molecule (10 atoms) is in the range that can be reasonably calculated on a conventional computer. It was able to verify the predictions of the quantum processor.

A quantum processor twice as large, with 20 qubits, already surpasses what our classical computing capabilities can simulate on these kinds of remarkable molecules.

Increase the number of qubits

To achieve such a “quantum advantage,” the number of qubits in computers must be increased.

In the last ten to twenty years several prototypes of quantum protocols with two or a few qubits have been realized – Often spectacular. More advanced systems can currently process a few dozen qubits.

In addition to the “coherence” problems already mentioned, there is also difficulty in the reproduction of body systems.

Let’s take the example of photons this time. Quantum algorithms require all of these light particles to exist “indistinguishable”, meaning they have similar characteristics, specifically the same wavelength (same color). The best sources for this are “quantum dots” because the photons emitted successively by ideal quantum dots are all identical. But the photons emitted by discrete quantum dots are usually very different. To perform a quantum computation, we are forced to use a single quantum box and the photons it emits continuously. This constraint complicates the architecture of future computers and limits the total number of qubits that can be used simultaneously.

Research to obtain is currently being carried out by several laboratories Restricted resources Everyone has who Same wavelengthThis can help preserve and receive a large number of identical photons emitted simultaneously. clock frequency High.

Regardless of the physical platform chosen to build qubits, they can be manipulated and measured in large numbers, but must be independent of each other. And to interface these quantum systems with classical controllers, often small nanoscale systems are required.

So scaling up quantum computing promises to give engineers in electronics, optics or computer science a tough time. It will undoubtedly be a part of our future and will shape science for a long time.