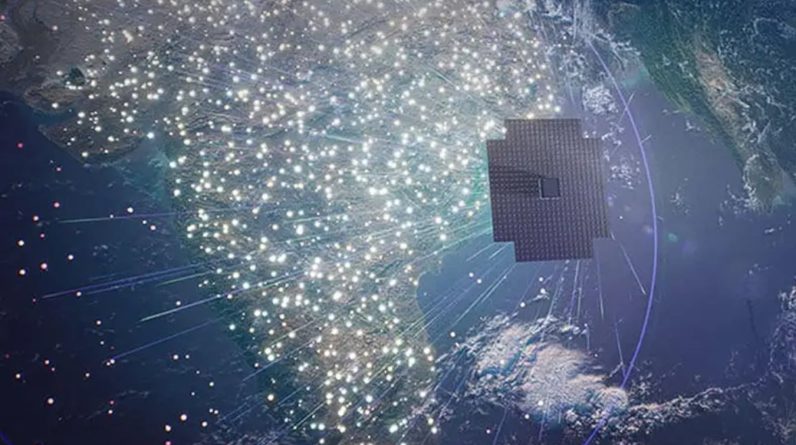 This weekend, on September 10th at 9:20 PM (EDT), the BlueWalker 3 satellite was successfully launched into orbit by a Falcon-9 rocket. SpaceX. Not only has the space agency launched a new set of Starlink satellites, it also has a new satellite designed by AST SpaceMobile: BlueWalker 3 that should serve as a demonstrator for the future “BlueBird” set of satellites. , which consists of 110 satellites in low Earth orbit.

targetAST Spacemobile Delivering 4G and 5G broadband connectivity directly from orbit to mobile phones (without cell towers); The entire Bluebird constellation work should be completed by 2024. But the launch of BlueWalker 3 is already raising a lot of concerns among astronomers: the 1500 kg machine is actually equipped with a reflective antenna of about 64m.2 (roughly the size of a squash court) can greatly affect observations.

Orbiting at an altitude of 500 kilometers, the machine will inevitably reflect a lot of sunlight; It can become brighter than the planet Venus, eclipsing all lights in the night sky except the Moon. And this is one of the hundreds of satellites to come! Also, BlueWalker 3 was designed for testing purposes only and the Bluebird satellites may be twice as large and therefore even brighter in the sky. Images from ground mounted telescopes become unusable.

” The reason our satellite is so large is because it requires a large antenna on one side with high power to communicate with a low-power, low-internal-strength telephone, so it’s an essential part of our infrastructure. », Scott Wisniewski told Space.com, Chief Strategy Officer of AST SpaceMobile. It will take several weeks and some regular testing before the company orders BlueWalker 3 to deploy its antenna.

Meanwhile, the International Astronomical Union is worried: Bluebird satellites may produce light trails in most images captured by ground-based telescopes, so more distant objects cannot be observed. But that’s not the only problem these inconsistencies cause: the technology requires a powerful radio beam to connect to the user’s phone. As a result, these communications can disrupt all radio astronomy that relies on highly sensitive instruments.

Astronomers from the International Astronomical Union’s Center for the Defense of Dark and Quiet Skies Against Satellite Interference (IAU CPS) invite all amateur astronomers to record the luminescence of BlueWalker 3 to raise awareness of regulatory authorities about the impact of these bright objects on astronomical research.

To date, there are no restrictions under international law on the size of satellites. ” Space nations include some aspects of satellite operation and life cycle in their regulations, but do not take into account the use of space as an environment or the potential impact that space objects may have on ground operations. », The IAU specifies the CPS. This new launch will highlight the limitations of the existing norms and help implement a new policy based on coordination between space agencies and observatories.

The United States Federal Communications Commission (FCC) has granted a test license to launch BlueWalker 3, but the license for subsequent satellites from AST Spacemobile depends on the gear’s performance and impact.

The AST Spacemobile is the only one currently offering cellular broadband from space. It has partnered with 25 cellular service providers, 10 of which will participate in the six-month BlueWalker 3 trial. Galaxies already in orbit.

effect, SpaceX and T-Mobile recently announced Starlink satellites to be launched next year will be able to connect directly to carrier phones on existing cellular bands. Called “Coverage Above and Beyond”, the two partners hope to provide connectivity wherever there is satellite coverage and systematically eliminate dead zones in the world.

So a new generation of satellites, Starlink V2, will be launched next year to provide this new service. They should have an antenna of about 25m2 ; About 30,000 of these devices are awaiting FCC approval. ” We manufacture specialty antennas, the world’s most advanced phased array antennas. […] It’s very complex hardware and software because the antennas move so quickly—they can move above our heads at speeds of up to 17,000 miles per hour. Normally a cell tower does not move at 17,000 miles per hour ! », Elon Musk explained. Speed ​​shall not exceed 4 Mb/s, Elon Musk clarified on TwitterBut it will suffice for SMS, MMS and voice calls.

Apple announced last week Partnership with satellite company Globalstar For the new iPhone 14 to deliver emergency messaging via satellite – users can benefit from it when they are not covered by a terrestrial network. The service will initially be rolled out in the US and Canada from November.