Home World Pakistan: In the name of honor, women are forced to stay in flooded villages 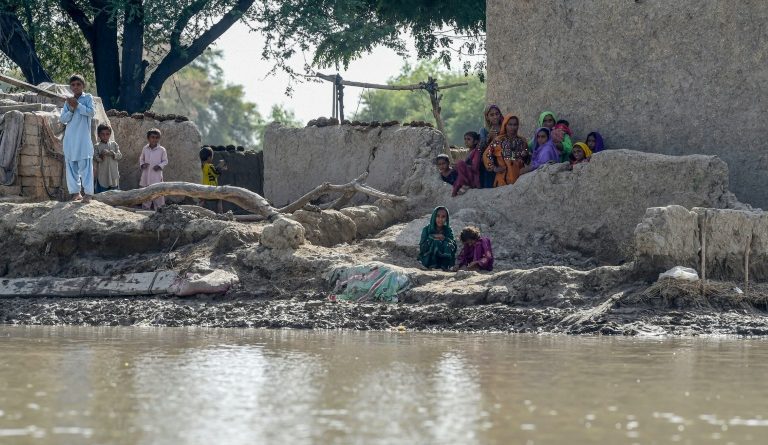 Pakistan: In the name of honor, women are forced to stay in flooded villages

The approximately 400 people of Basti Ahmad Din, a small Pakistani village surrounded by flooded fields, accessible only by boat after monsoon rains, are threatened by famine and disease. But they refused to leave.

Residents have explained that if they leave their homes to seek refuge in a displaced persons camp, women in the village will have to deal with men who are not part of their family, which is an affront to their “dignity”. AFP.

The women of Basti Ahmad Din had no say in this decision.

Shireen Bibi, 17, said, “It’s up to the village elders to decide,” when asked if she wanted to stay safe in a camp on dry land.

Monsoon rains not seen in decades caused floods that submerged a third of Pakistan this summer. As elsewhere in Basti Ahmad Din, people are coming up against the new reality, homes and lives are being destroyed everywhere.

More than half of the 90 houses of Basti Ahmad Din, located in Punjab province (Middle East), were destroyed.

Cotton plants that surrounded the village when the rains started in June are now rotting in flooded fields. The dirt road that previously connected the small town to the nearest town is under three meters of water.

Dilapidated boats were the only way villagers could get supplies outside. But the journey is expensive and the owners of the boats have raised the prices.

The people of Basti Ahmad Din have very little food in stock. They decided to share and ration what little wheat and grain they could salvage from the water.

Many relief workers who had come to the village to help begged them to leave. in vain

“We are Balochi. Baluchis don’t allow their wives to go out”, reasons resident Muhammad Amir, referring to the dominant ethnic group in the village.

“Balochis would rather starve their families out,” he insists.

In rural Pakistan, often deeply conservative, a patriarchal code based on the concept of “honor” governs women’s lives.

This severely restricts their freedom of movement and their interactions – if they have any – with men they are not related to.

In desperate situations like the current floods, women can find themselves completely without food or care.

Instead of taking their families there, Basti Ahmad Din’s men make a weekly boat trip to a nearby camp for supplies and aid.

The village elders – all men – believe that it is only acceptable for women to leave in “emergency” situations, such as a serious health problem.

Natural disasters are not considered valid reasons. Mureet Hussain, an elderly man, assures them that they did not leave even during the last major flood in 2010.

He said we did not leave the village then. “We don’t allow our women to go out. They cannot stay in these camps. It is a matter of respect. »