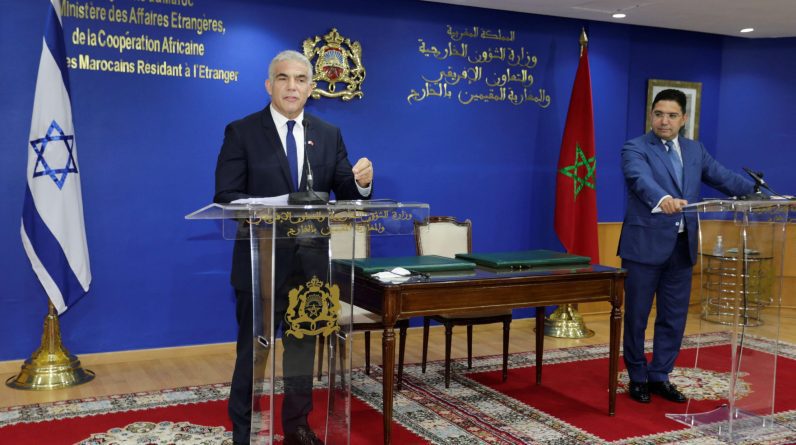 Israeli Prime Minister Yair Lapid will travel to Morocco in a few weeks to prepare for a summit between Israel and countries that have mended their ties since signing the Abraham Accords.

According to Israeli media, the summit will be organized under the auspices of the United States, in the presence of Morocco, the Emirates, Sudan and Bahrain, on the second anniversary of the signing of the agreements.

Several senior Israeli officials have recently visited Morocco, including Chief of Staff of the Israeli Army Aviv Kochavi, Deputy Prime Minister and Minister of Justice Gideon Saar, Inspector General of the Israeli Police Yaakov Shabtai, and Minister Issavi Frej. Regional cooperation. Israeli media are talking about the upcoming visit of Morocco’s Minister of Cooperation and Foreign Affairs, Nasser Bourita, to the State of Israel next September.

Moroccan-Israeli relations have improved in recent months. In fact, the exchange of visits led to the signing of numerous agreements in various fields, especially military cooperation and intelligence, which irritated Algeria, whose commanders considered that any rapprochement between the kingdom and the state of Hebrew was not in their interest.

Israel’s current prime minister, Yair Lapid, visited Morocco when he was foreign minister in Israel’s interim coalition government. His visit was described as historic, as it was the first for a senior government official, and several key agreements were signed in addition to the official opening of the Israeli Liaison Office in Rabat.

It should be noted that Morocco, after an almost 20-year hiatus, has resumed its relationship with Israel under former US President Donald Trump, in exchange for US recognition of the kingdom’s sovereignty over its southern provinces, a decision that has remained the same with the current US administration of President Joe Biden.

See also  Homeless camps in New York, in view of the new mayor