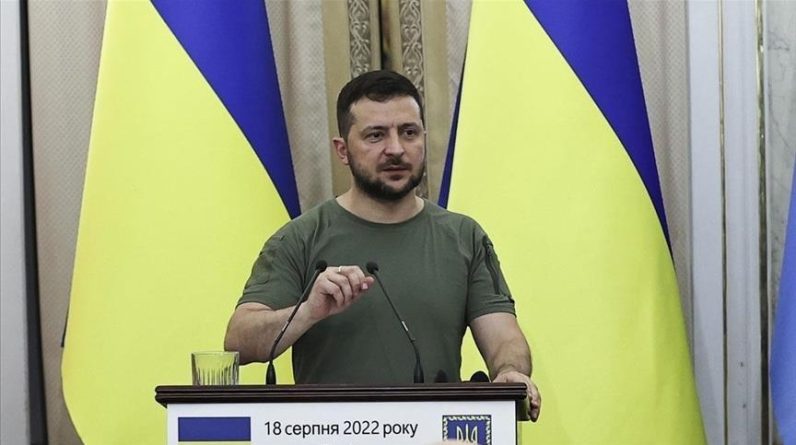 This emerged from a press conference he held in the Ukrainian city of Lviv on Thursday with his Turkish counterpart Recep Tayyip Erdogan and United Nations Secretary-General Antonio Guterres.

The Ukrainian president demanded that Russia immediately withdraw its military forces from the Zaporozhye nuclear power plant and stop provocations and attacks.

“For peace talks to begin, Russia must first leave the occupied territories,” he said.

He expressed his great pleasure in welcoming Turkish President Erdogan and Guterres, “I especially want to thank Mr. Guterres and Mr. President Erdogan for their support for Ukraine’s territorial integrity and sovereignty.”

Zelensky accused Russia of practicing terrorism because of its attacks on Ukraine, and said the presence of Erdogan and Guterres in Ukraine was crucial to restoring international law.

He confirmed that the tripartite meeting with Erdogan and Guterres was about the development of Ukrainian grain exports.

Zelensky stressed that the agreement on the “grain corridor” is very important in order to prevent a global food crisis.

The Ukrainian president accused Russian forces of stealing grain from areas under his control, calling on the relevant parties to respond to this behavior.

On July 22, Turkey, Russia, Ukraine and the United Nations signed the “Initiative Document on Safe Transportation of Grain and Food Products from Ukrainian Ports” during a meeting in Istanbul.

The agreement includes protecting grain exports to the world that are stuck in Ukrainian Black Sea ports (Eastern Europe).

* Translated from Arabic by Isa Aliyo