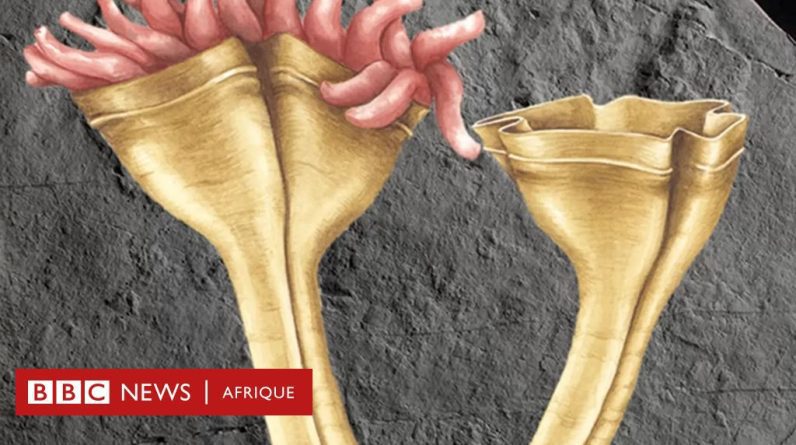 It is the oldest animal predator and is 560 million years old.

British scientists discovered it several years ago in Charnwood Forest in Leicestershire and have now identified its fossil for the first time.

They named Auroralumina attenboroughi in honor of biologist David Attenborough and believe it to be the ancestor of cnidarians, the group of species that today includes jellyfish.

“It looks like the Olympic torch, with its flame-like tentacles,” says Frankie Dunn of the University of Oxford, who reported on the discovery in the journal Nature Ecology and Evolution.

Not only does the discovery push back evidence of predation in the animal kingdom by 20 million years, it is also the first example of a creature with a true skeleton.

The creature’s shadow, about 20 cm tall, was embedded in a long, sloping layer of quarry soil, surrounded by other fossilized forms.

All of these species are believed to have been transported by the turbulent flow of underwater sediment and ash from an ancient volcano.

The site was discovered in 2007 when researchers cleaned Charnwood’s rock face with high-pressure hoses.

It took 15 years to understand the assembly and position of auroralumina in rock.

The Leicestershire site is world famous for teaching us about the Ediacaran (635 to 538 million years ago), a period of geologic history immediately preceding the Cambrian that saw a great explosion in the number and diversity of species on Earth.

The Cambrian (538 and 485 million years ago) fixed the shape of many groups of modern animals.

But auroralumina shows that its group of cnidarians has a heritage that goes even further back to the Ediacaran.

“This is the strongest evidence of modern-looking organisms in the Precambrian,” said Phil Wilby, head of paleontology at the British Geological Survey.

Although the name Cnidarian may sound unfamiliar, you probably recognize its members: corals, jellyfish, and anemones.

One of their characteristics is the stinging cells they use to capture their prey.

Analysis of the characteristics of Auroralumina as related to a subgroup of meduzozoans within the cnidarians.

Medusozoans go through several stages in their complex life cycle.

At one point, they form a mass anchored to the ocean floor, and then, they move into a floating asexual stage, during which they engage in reproduction.

In this free-floating stage, they adopt an umbrella-like body with shedding tentacles. They turn into jellyfish.

Thus Auroralumina in its immobile, rooted state is similar to the meduzozoan.

What’s really interesting is that we think it’s a rift, that is, these two “cuts” meet near its base, and there would have been a continuous skeleton of the ocean floor, which we don’t. Unfortunately, the fossil is incomplete,” Dunn told the BBC.

Fission, the splitting of something into two branches or parts, is another first for Auroralumina in the fossil record.

Paleontologists from all over the world come to visit Charnwood Forest.

The biggest find here was a fossil called Sarnia masoni, which was discovered in the 1950s by two students, Roger Mason and Tina Negus, and was the first Precambrian fossil discovered.

Sarnia was also later identified in the rocks that make up the Ediacara Mountains in Australia, hence the name geological period.

It’s a strange life form that looks like a fern leaf, but scientists are convinced that it’s some kind of animal.

There is even an example 40 cm from the auroralumina in the stringer assembly.

By giving it this name, scientists wanted to outline the connection between the region and David Attenborough, who grew up in this central part of England.

“When I was at school in Leicester, I was a keen fossil hunter,” recalls the renowned biologist and BBC presenter.

“The rocks where Auroralum was discovered were considered very old, long before life began on the planet, so I didn’t look for fossils there,” he says.

“A few years later, a guy from my old school discovered one and proved the experts wrong. He was rewarded for noting his discovery. Now I’m almost caught, I’m very happy,” he added.