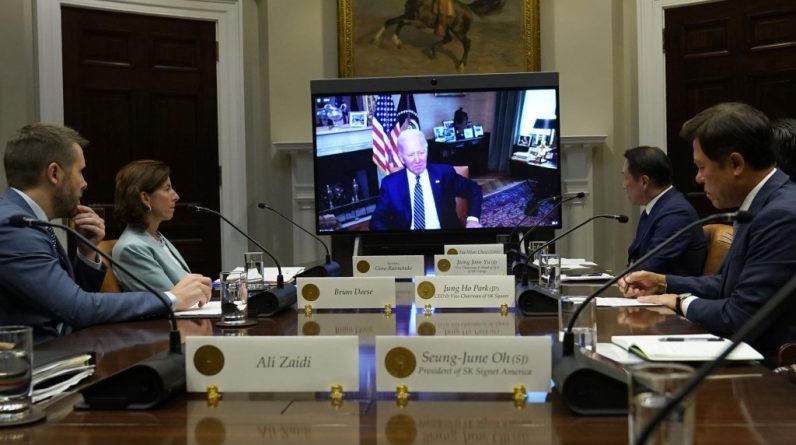 WASHINGTON/SEOUL, July 27 — SK Group Chairman Chey Tae-won on Tuesday unveiled an ambitious plan to invest an additional $22 billion in the United States during a virtual meeting with US President Joe Biden. The US president hailed the announcement, calling it one of the “greatest investments” America had ever seen.

“Today we are announcing an additional $22 billion in new investment in the United States,” Che told the US president. “This means that SK will invest nearly $30 billion in the future, extending our recent $7 billion investment announcement in electric vehicle batteries,” he added.

Biden’s unusual virtual meeting with the South Korean business leader took place at the White House, which was also attended by US Commerce Secretary Gina Raimondo. The exchanges took place via video conference as Biden continues to recover from Covid-19 since being diagnosed late last week.

Appreciating SK Group’s investment plan, he noted that it will create around 16,000 new jobs in the US over the next three years. “SK has already committed $30 billion in investment here and today they are announcing another $22 billion. This will increase their US workforce from 4,000 to 20,000 workers by 2025,” Biden said. “Today’s announcement is proof that the United States is beginning to reengage with its allies,” he added.

Biden also sought advice from South Korean entrepreneurs on ways to attract more foreign investment to the United States. Chey highlighted the need for more educated workers with the right skills to work in high-tech industries such as semiconductors and electric vehicle (EV) batteries. “One of the things we promise you is that we will continue to invest in education,” Biden responded.