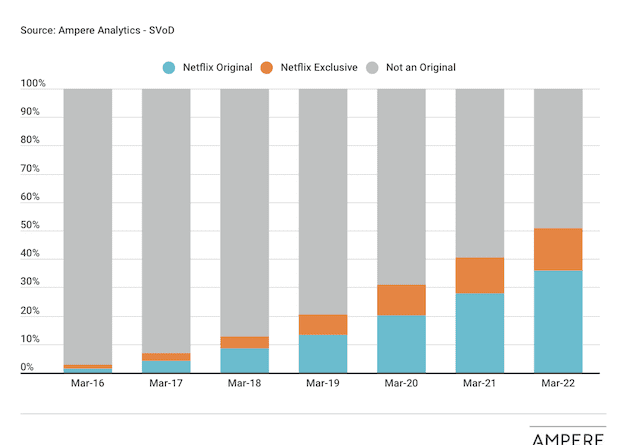 As of March 2022, the number of original and exclusive titles in Netflix’s American Catalog is more than 50% of all programs available on the platform. For the first time in the history of the company. In fact, according to data compiled by Ampere, Netflix’s US offer now includes more than 3,700 “Netflix Original” (ie original and exclusive) branded movies and TV seasons, which have consistently delivered approximately 7000 titles over the past three years. 14.8% of the plans offered are “exclusive” and 35.9% are “original”.

“Originals” has been at the core of Netflix’s strategy for many years. In September 2016, when “Original” and “Exclusive” represented only 5% of the US list, then-Director of Finance, David Wells, set a 50-50 distribution target between original titles and titles under license. . As Netflix’s original content costs soared to $ 6.2 billion by 2021, the target reached this year was $ 2.8 billion, more than twice the size of second-largest investor Disney +.

These investments helped make Netflix a leading distributor of popular content. Ampere’s Popularity Score indicates that in the first quarter of 2022, Netflix’s original and exclusive programming, on average, accounted for 12% of all SVoD platforms in the top 100 topics available on SVoD in the United States.

Ampere analysis points out that Netflix has gained more autonomy from studios as studios descend on the battle for SVOD, so Netflix has gradually lost their plans. In addition, according to Ambier, “originals” have a real strength internationally because they are exclusive and less expensive to distribute than studio projects.

Based on current growth rates, the research firm estimates that by the end of 2024, 75% of the movie and TV seasons available on Netflix will be original or exclusive. Schedule hours – which are currently 45% original or exclusive – are expected to exceed the 50% limit in the fourth quarter of 2022.

Despite this activism, Netflix has overtaken Apple as the largest player in the “original” category, with a very limited offer, which is true. But Netflix is ​​ahead of the two current streaming operators, Amazon Prime Video (9%) and Hulu (4%).