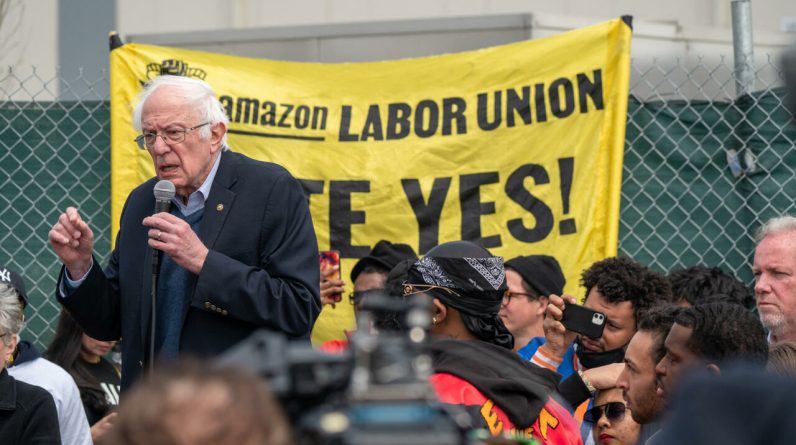 Amazon workers in New York continue their struggle to form unions within the US company. After the first victory a few weeks ago, in the largest area of ​​Staten Island, organizers are preparing another poll at another warehouse. On Sunday, April 24, they received support from Bernie Sanders.

” The time has come to fight corporate greed and create an economy that benefits not just a few, but everyone Bernie Sanders shouts.

On the site Amazon On Staten Island, Bernie Sanders is welcomed as a hero. The senator, leader of the Democratic Left, came to support the workers’ struggle to form unions within the American establishment. Because for these employees, the union formation at the JFK 8 site a few weeks ago was only the beginning. They want to expand the operation to all Amazon sites in the United States.

Bernie Sanders did not hesitate to condemn Amazon’s methods, accusing them of undermining workers’ efforts to unionize: ” I do not understand. You are a $ 170+ billion company that spends money on breaking up a union and preventing workers from getting decent wages, jobs, decent health care and access to housing. How Much Money Does Jeff Bezos and Other Millionaires Need? ⁇

During his visit, Bernie Sanders was accompanied by Congresswoman Alexandria Ocazio-Cortez, who pledged the support of New York-elected officials to the Amazon workers. Important support a few days before the new referendum to form a union on another Staten Island site.