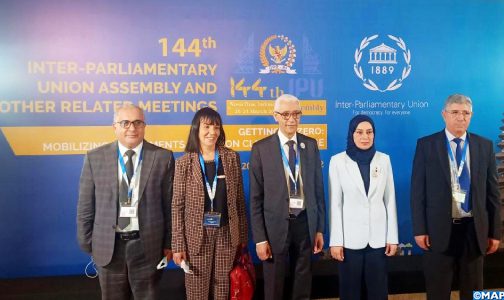 Rabat – In connection with his participation in the work of the 144th Inter-Parliamentary Assembly (IPU) in Indonesia, the Speaker of the House of Representatives Rashid Talpi Alami and the delegation accompanying him held bilateral meetings. Speakers of the parliaments of South Korea, Egypt, France, Malta and Bahrain.

The discussion, which took place in the presence of the Ambassadors of the Kingdom of Morocco in Indonesia and Singapore, focused on the Moroccan Parliament expressing the excellent relations it maintains with the parliaments of these countries. A press release issued on Thursday by the House of Representatives, in addition to the common desire to promote the dialogue between members of parliament for the protection of the public interest, public interest and peace, security and stability in the world, and to coordinate cooperation and coordination in international and regional forums.

The Moroccan Sahara also sparked discussions on recent developments in relation to the question, citing the same source as Mr. Talpi Alami took the opportunity to welcome the parliamentary position of his parliamentary representatives to the countries. His authors on the content of the Moroccan Autonomous Initiative are the most serious, realistic and credible basis for resolving this artificial conflict, and the international community adheres to it.

In the menu of his interviews, there was a question of coordinating the bridges of dialogue and consultation between the Moroccan Parliament and other parliaments in all areas, especially the implementation of friendly committees and parliaments, which we underline. Same proof.

The main theme of the public debate during the 144th IPU Assembly was “Gaining zero emissions: mobilizing parliaments to act on climate change”, an opportunity for participants to discuss the role of parliament and their contribution to the implementation of national and international policies. And climate change agreements aimed at strengthening international parliamentary action in this area.

The Legislature must complete its work by adopting the final document and resolutions relating to the two themes referred to by the Standing Committee on International Peace and Security and the Standing Committee on Sustainable Development. “Reviewing and redefining processes for designing peace processes to promote sustainable peace” and “Improving information and communication technologies for education, especially during epidemics”.

The Assembly comprises of all the statutory organs of the IPU, including the Governing Body, the Standing Committees, the Parliamentary Human Rights Commission and the Committee on Questions on the Middle East, as well as the Women’s Parliamentarians and the Young Parliamentarians’ Forum.