Home World The General Assembly adopted a resolution calling for the withdrawal of Russian troops from Ukraine. Morocco was not present at the time of the referendum 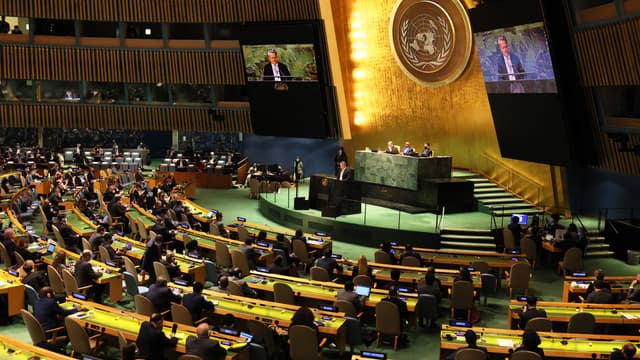 The United Nations General Assembly on Wednesday passed a resolution strongly condemning Russia’s “aggression” against Ukraine and calling on Russia to immediately withdraw its troops from Ukrainian territory.

The text received 141 votes in favor, 5 against (Russia, Belarus, Eritrea, North Korea and Syria) and 35 abstentions. The resolution, co-sponsored by 96 member states, requires a two-thirds majority. This is not a bond. The referendum comes just days after Russia vetoed a draft Security Council resolution condemning Russia’s occupation of Ukraine. For information, the 193-member United Nations General Assembly has no veto power.

Read also | Beginning of negotiations on a ceasefire in Ukraine

The resolution adopted by the General Assembly “reaffirms its commitment to the sovereignty, independence, unity and territorial integrity of Ukraine, extending its territorial waters within its internationally recognized borders.” It strongly condemns the Russian Federation’s aggression against Ukraine in violation of Article 2, paragraph 4 of the United Nations Charter, and calls on the Russian Federation to immediately suspend its use of force against Ukraine, further threatening or using force against any member state.

The General Assembly “demands the immediate, complete and unconditional withdrawal of all its military forces from Ukrainian territory within the country’s internationally recognized borders.” UN Secretary General Antonio Guterres responded immediately to the adoption of the resolution. “It simply came to our notice then. As Secretary-General, it is my duty to stand by this resolution and to be guided by its call. The message of the General Assembly is loud and clear: End hostility in Ukraine – now. Quiet the guns – now. Open the door to dialogue and diplomacy – now, “the UN chief said at a news conference.

“According to the United Nations Charter, Ukraine’s territorial integrity and sovereignty must be respected. We have no moment to lose. The dire consequences of the conflict are clear. : “The world wants to end the horrendous human suffering in Ukraine.” Our global flash appeal was met with record generosity. I am deeply grateful for the support of the donors, ”he added.

Donors responded to a flash appeal launched by the United Nations and its allies on Tuesday, pledging $ 1.5 billion to help millions of people in Ukraine and refugees in neighboring countries. Guterres said he would continue to do all he could in the future to “immediately stop the hostility and contribute to the emergency negotiations for peace.” “Ukrainians desperately need peace. People around the world are demanding it,” he concluded.

As for Morocco, the Kingdom of Morocco such as Azerbaijan, Burkina Faso, Ecuadorian Guinea, Ethiopia, Guinea, Guinea-Bissau, Togo, Turkmenistan, Uzbekistan and Venezuela were not present during the referendum. The 5 countries that voted against the resolution were: Russia, Syria, North Korea, Belarus and Eritrea.

According to the Ministry of Foreign Affairs, the non-participation of Morocco can not be subject to any explanation regarding the policy position on the situation between the Russian Federation and Ukraine, reaffirmed in the statement of the Ministry of Foreign Affairs, African Cooperation and Moroccans living abroad, dated February 26, 2022. “Indeed, the Kingdom of Morocco continues to follow with concern and concern the evolution of the situation between Ukraine and the Russian Federation. .

“The Kingdom of Morocco reaffirms its strong commitment to respect for the territorial integrity, sovereignty and national unity of all UN member states. Evidence adds that the Kingdom of Morocco has always encouraged the use of force in resolving inter-state conflicts, calls for the continuation and intensification of inter-party dialogue and negotiations to end this conflict, and urges the United Nations Secretary-General to respond to the United Nations Secretary-General’s call for the UN Secretary-General to respond And has decided to finance the humanitarian efforts of neighboring countries, the same source Ends. ⁇