Home World Mr. in Brussels on the sidelines of the EU-AU summit. Series of interviews with Purida 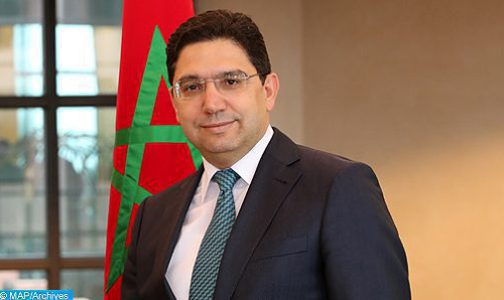 Brussels – Moroccan Minister of Foreign Affairs, African Cooperation and Foreign Affairs Nasser Borida held a series of talks in Brussels on Thursday on the sidelines of the Sixth European Union-African Union Summit.

The Moroccan delegation will be led by Mr. Purida thus met with Antonio Vittorino, Director-General of the International Organization for Migration (IOM), and interviewed his French representative, Jean-Yves Le Drian.

The EU-AU Summit is a new opportunity for Morocco to reaffirm its quality presence, backed by the leadership of HM King Mohammed VI, as part of the State Vision for a Prosperous Africa. , Liberated and capable of taking his destiny into his own hands.

Organized as a preview of the summit, with very active participation from all sections of Morocco (intergovernmental, private sector, voluntary organizations), the round table of Morocco’s Co-Chair Migration and Movement on Friday is a renewed recognition of the state’s experience and recognition, and Thanks to the state leadership with its African brethren and its European friends and allies.