Home World China has targeted India on the pretext of Sri Lanka and advised – Chinese Foreign Minister Wang Yi tlifw that a third country should avoid intervention between China. 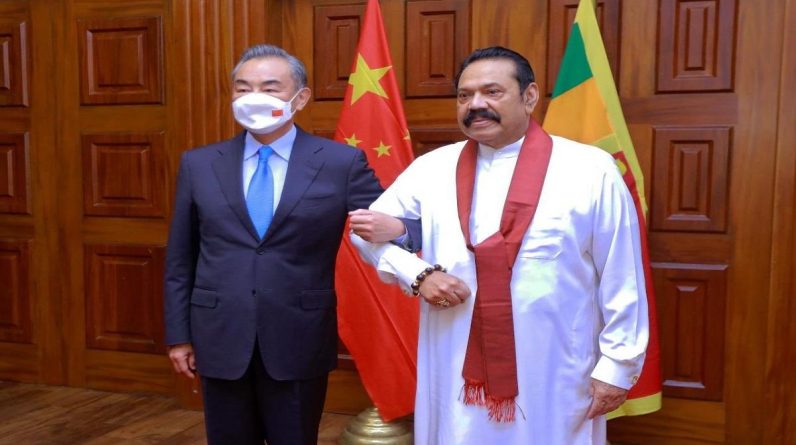 Highlights of the story

The Chinese Foreign Minister arrived in Sri Lanka one day on Sunday after a two-day visit to the Maldives. China’s official Xinhua news agency quoted Wang Yi as saying that the friendship between China and Sri Lanka would benefit the development of both countries.
And protect the fundamental interests.

Pointing to Sri Lanka’s neighbor India, he said, “Our relationship is not aimed at any third party and no third party should interfere in it.”

China is investing billions of dollars in ports and infrastructure projects in Sri Lanka amid its debt trap criticism. China is trying to strengthen relations with Sri Lanka.

China launched a port project in Hambantota, Sri Lanka a few years ago. But the project was shut down as China’s debt to Sri Lanka increased. In 2017, China signed an agreement with Sri Lanka under which Chinese state-owned companies invested 70 percent of their stake in the Hambantota port.

India’s concern has been heightened by China’s role in the port. Analysts believe that China is getting closer to the south of India. China will also build a new city under the Colombo port city. India is concerned that China is increasing its presence in the Indian Ocean due to these measures.

The BRI was heavily criticized by the previous Donald Trump administration in the United States. Trump believed that China was pushing small countries into huge debt, which would jeopardize the sovereignty of those countries.

Last month, China suspended plans to build hybrid power plants on three islands in the north of Sri Lanka, citing “security concerns” from “third parties”. The place is not far from the Tamil Nadu coast and in such a situation, India’s concern increased, but then China withdrew from the plans.

During talks with Sri Lankan Foreign Minister GL Peiris, Wang Yi also proposed setting up a base for the development of island nations in the Indian Ocean. Observers say China is trying to expand its influence in the region.

In a press release issued by the Chinese Ministry of Foreign Affairs, Wang Yi quoted China as proposing that a forum for the development of the Indian Ocean island nations should be created in a timely manner to build consensus and unity and promote the development of all. . ‘ Wang Yi said Sri Lanka could play a key role in this.

A tweet was made by the Chinese Embassy in Colombo describing Sri Lanka as the true pearl of the Indian Ocean. During his meeting with Mahinda Rajapaksa, Wang Yi praised him highly and called him an old friend of the Chinese people.

A statement from Sri Lanka’s presidential office said that President Gotabhaya Rajapaksa had requested China to rebuild the structure built to repay the loan to Sri Lanka.

President Rajapakse has said that restructuring debt repayments would be a major relief to Sri Lanka to address the economic crisis caused by the Covid 19 epidemic. China owes an estimated $ 1.5 billion to $ 2 billion to Sri Lanka this year.