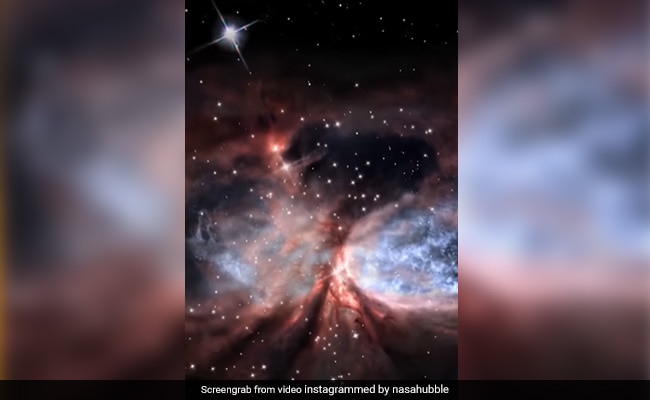 NASA, the American space agency, always shares pictures and videos with people about the wonderful and amazing things about space. All of NASA’s posts link information and people to space. We also get a lot of mysterious information about space through NASA’s record. Now again NASA’s Hubble Space Telescope shared a great post on Instagram this Tuesday. In this post, the Hubble Space Telescope gives an overview of the formation of a new star in space. In this video, you can see both poles of the newly formed star shining brightly. The video also shows glowing dust particles and galaxies in red and white.

NASA wrote with this post that it is now entering the realm of active star formation. You can see in the video that there is also a blue nebula behind this undeveloped star. Due to this its milky glow is very beautiful. NASA says that this nebula is located in the farthest part of our galaxy, about 2,000 light-years from Earth.

NASA has identified this nebula as Sharples 2-106. The company said that this nebula is giving birth to a big star. This is the bipolar star formation zone in which a giant star forms. According to NASA, the under-formed star IRS4 (Infrared Source 4) was “born about 100,000 years ago. IRS4 scattered dust and hot gas in the nebula.”

The U.S. space agency says hundreds of low-mass brown dwarf stars are scattering in the nebula’s gas amid the galaxy’s activity. The distance between these stars is measured as two light-years. Hubble captured this breathtaking image of the Sharpless 2-106 with the help of a ground-based subaru telescope. It shows a three-dimensional plane.

See also  What is the difference between frogs and toads?

This post has received over 53 thousand likes so far. People who watched this video are shocked. Many people have been commenting on the video. One user wrote – Fantastic. Another wrote- “Everything you discover about the universe is wonderful and wonderful.”