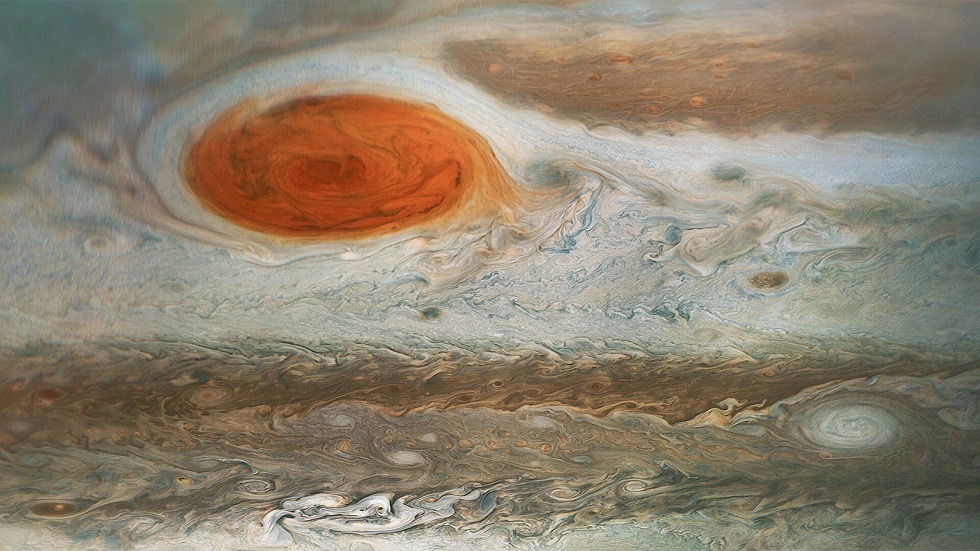 Information sent by the Juno spacecraft indicates that Jupiter’s red dot is a 16,000-kilometer storm in the planet’s atmosphere.

The scientific journal notes that the depth of the storm is greater than previously thought, and that its location may be related to the irregularity of the planet’s gravitational pull.

The Juno spacecraft, which has been orbiting Jupiter since 2016, is set to explore the planet’s gravitational and magnetic fields, study its atmosphere, and verify the hypothesis that the planet has a solid core.

Jupiter’s atmosphere is characterized by severe storms and swirling wind systems, the largest and most intense being the Great Red Spot, which is in a continuous cyclical motion that could engulf the entire planet. It is not known whether this is limited to the upper layers of the planet’s atmosphere or to the deeper layers.

Using microwave and gravity measuring equipment installed on the Juno spacecraft, scientists were able to penetrate Jupiter into the cloud to a depth of 550 km, and found that the storm penetrated deep below the level of the clouds, i.e. the altitude. Condensation level of water and ammonia. According to scientists, small dynamic processes leading to precipitation and currents operate at much deeper levels in the atmosphere than previously thought, which may indicate a connection between Jupiter’s inner atmosphere and the lower atmosphere.

Scientists have found fluctuations in the planet’s gravitational field caused by the storm and the local currents feeding the storm moving downwards. According to the GSE gravimeter, the depth of the red dot does not exceed 500 km, while local currents extend to a depth of 3,000 km.

See also  On the moon, which hammer or feather will hit the ground first?