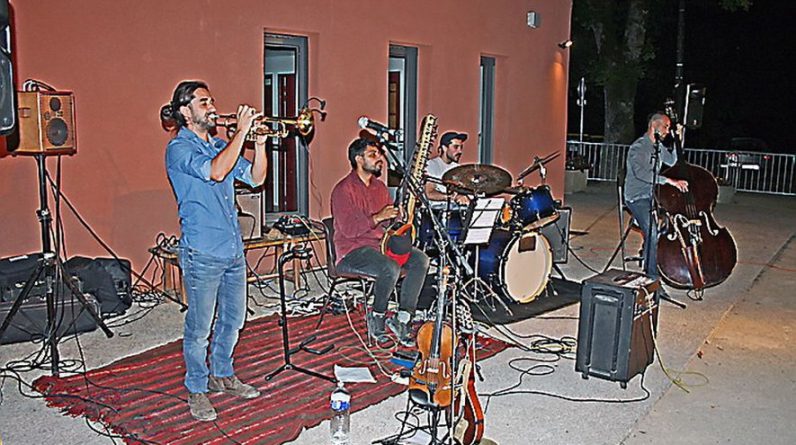 On Wednesday, August 25, the Plastic Competition Team delighted its audience with a truly impressive interpretation of several melodies for nearly 2 hours of Central African or Colombian descent. There were plenty of people (over 80) under the chestnut trees in the Bikers area in front of the village hall, and the weather was kind enough to provide a gentle and quiet evening.

The group was formed by local boy Hugo Peiris (violin, trumpet, mandolin, heart), with Arthur Benio on chora and vocals, and Camille Duvenode on double bass and singer and tom drum on drums.

The tutorial was originally a compilation project around Kora with French and Spanish texts. The musicians were childhood friends and were taken close by Govt health restrictions due to the cancellation of many of the shows they left behind.

It has 21 strings according to the Veena principle. Each string executes a unique note. No pinching on frees like the guitar. If we do not change the pitch of the particular strings before each piece then there are not all references to illustrate a given piece. The descriptions took us to West Africa and Colombia. We witnessed a rain of very quick notes synchronized very quickly between the violin and the chorus, pierced by a drummer and double bass, the pulse of which never ceased to enhance the theme on a topic. Each piece was widely acclaimed and the public’s interest in this extraordinary music continued. No one left their seat until the end of the show, and there was even a definite reminder from listeners that the musicians needed to hear one more piece.

These summer concerts have become a habit in Cambodia and we can count on Hugo to deliver a quality show that will make you forget the darkness of a moment every time.

For those who want to revisit some of the band’s footage, go to YouTube and type in the plastic bag in search.

See you next year Hugo …