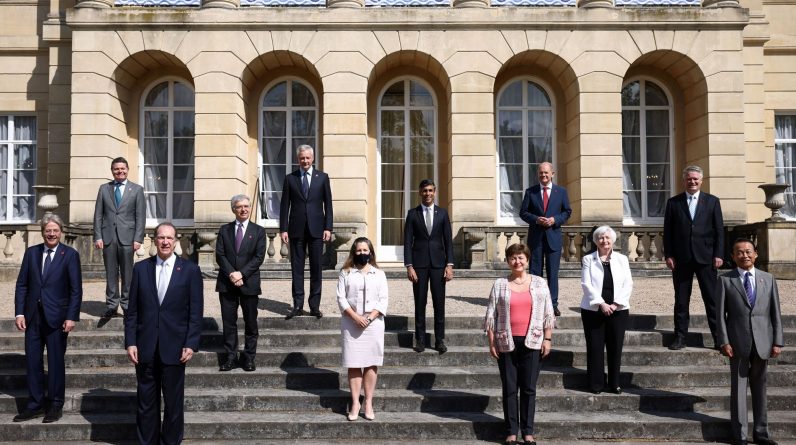 Members of the G7 group of the world’s most developed countries agreed on Saturday to introduce a minimum corporate income tax of 15 percent. Reuters reports. The purpose of the agreement is to encourage multinational corporations to relocate their headquarters to countries with lower tax rates.

British Finance Minister Rishi Sunak and German Finance Minister Olaf Scholes called it a historic move. “This is good news for tax justice and solidarity and bad news for tax havens around the world,” Scholes said. “The next step is to discuss the G7 agreement with the Organization for Economic Co-operation and Development (OECD) and its G20 partners,” he added.

French Finance Minister Bruno Le Myre called the global corporate income tax at least 15 percent a “starting point” and promised to fight for the increase. “This is a starting point and we will try to make sure this tax is as high as possible in the coming months,” Le Myre wrote on Twitter.

Here we are!
After 4 years of fighting, a historic agreement has been reached with the G7 member states on a minimum tax on companies and digital giants.
France can be proud! pic.twitter.com/eIMqjweyjl

Rich countries have failed for years to improve tax collections from multinationals and large technology companies such as Facebook and Google. The current agreement was reached in London at a meeting of G7 finance ministers from the United States, Canada, Japan, Britain, Germany, Italy and France.

The issue of taxation by multinational corporations is one of the most important topics in today’s world economy, and companies – especially those known as large Internet or IT businesses – often tax their profits in countries with low or zero corporate income. In Europe, multinational corporations and large technology companies are headquartered in, for example, Ireland, Luxembourg or the Netherlands.

In recent years, there has been talk of introducing a digital tax for large Internet companies such as Facebook or Alphabet (Google’s parent company), which was the topic of the EU summit in Tallinn in September 2017.

The EU executive wanted to present a proposal for new rules on fair and effective taxation of digital companies by 2018. The main argument of those who have supported the digital tax from the beginning is that the big internet companies are making huge profits in these countries, but paying very little in taxes every year.

Finally, the European Commission (EC) put forward a proposal for tax changes for digital companies in March 2018, including 3% income tax (approximately 20 billion crowns) for some digital operations of companies with a total minimum annual global revenue of 50 750 million and 50 50 million in EU revenue. (1.25 billion crowns). However, the finance ministers of the EU member states have repeatedly failed to agree on a possible format for the future digital tax, which has been opposed by Ireland, Sweden and Denmark.

This is big money

According to a study by the EU Tax Laboratory released this week, the EU could receive about 50 billion euros (1.3 trillion crowns) in taxes a year from multinational corporations if the OECD agreed at a rate of 15 percent. The study points out that it is not even necessary for all countries to adopt a minimum tax to be effective. “If a significant minimum tax is used by many domestic countries (multinational corporations), tax havens can no longer be attracted by offering lower fees,” the study said.

See also  More than 200 prisoners have been displaced after massacres in prisons in Ladakh, Guayaquil and Guinea | Security | News

The Union announced its intention to participate in a global settlement within the Organization for Economic Co-operation and Development (OECD). Some countries have already decided to pursue independence. France, for example, approved a 3% digital tax in July 2019, which sparked unrest in the United States. Last January, however, Paris and Washington agreed to a ceasefire – which postponed tax collection and the United States promised not to impose planned retaliation.

In the United States, taxation is an unjust business practice

At the same time, the United States sees a digital tax collection – which was adopted in Britain, Italy, Austria and Turkey, but often at a rate of just a few percent – exemplifying unfair business practices that mainly affect US companies.

The US reaction should then be a revenge charge. Chekia was originally the target of a US investigation. However, in March of this year, Washington announced that the Czech Republic had stopped investigating because the country had not yet introduced the digital tax.

However, in mid-May, the Czech Chamber of Deputies passed a government proposal to introduce a digital tax. The five percent tax would apply to Internet companies with worldwide revenues of 750 million euros (about 19 billion crowns), which would have an annual revenue of at least 100 million crowns a year for taxation services in the Czech Republic. The Czech Ministry of Finance has previously stated that the Czech Republic is ready to repeal the tax nationally if a solution can be found at the level of the Organization for Economic Co-operation and Development (OECD).