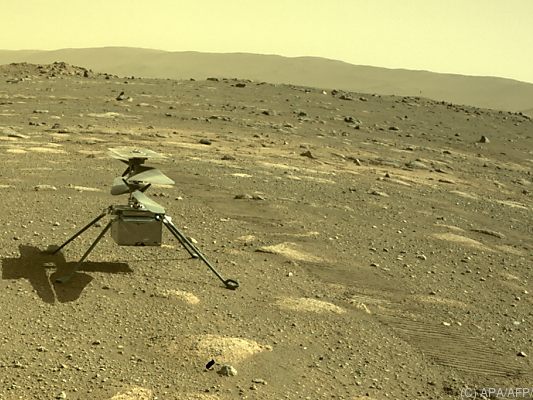 After its fifth flight, the Mars helicopter “intelligently” landed on the planet 130 meters south as planned. During the voyage, the mini helicopter reached an altitude of about ten meters, NASA announced Friday (local time). NASA on Friday also released the first audio recording of the Mars helicopter flight.

In the new location, “Ingenuity” (German: பு கூ्ा) will perform new tasks over the next few weeks, namely providing aerial recordings of inaccessible areas of a rover or creating three-dimensional images from the heights of the atmosphere. NASA has announced that these discoveries could help explore Mars and other space objects from the air in the future.

The rover “Perseverance”, which landed on Mars in a mini-helicopter in February, recorded the sounds with one of its microphones on the fourth flight of “Intelligence” in late April. This is the first audio recording of Mars and the first spacecraft to be built from one spacecraft to another.

The helicopter could not be heard particularly well, however, and “diligence” was recorded from a distance of about 80 meters, and the thin Martian atmosphere and wind reduced the noise of the aircraft. But even the smallest that can be heard is “the greatest surprise” and “the gold mine to understand more about the Martian atmosphere,” said scientist David Mimoun.

“Intelligence” took off for the first time on April 19, being the first aircraft to fly to another planet. The mini-helicopter was set up on a NASA rover “diligence” at the end of February – after 203 days of flight and 472 million kilometers of perfection – with a dangerous maneuver known as the “Jesero crater” on dry Mars Lake.

The approximate $ 2.5 billion (approximately 2 2.2 billion) rover took eight years to grow and build. He must search for traces of previous microbial life on Mars and study the planet’s climate and geography. On April 30, the U.S. space agency announced that there would be more “intelligence” on Mars than previously planned. Originally planned for about 30 days, this work was initially extended to 30 days.