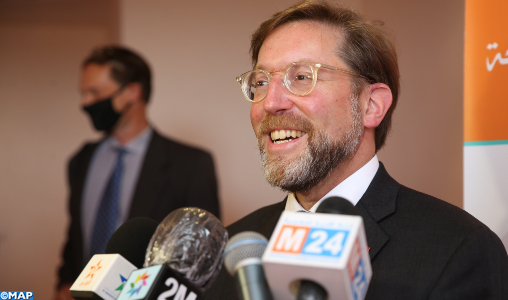 Fez – Charge de Affairs, David Green, of the US Embassy in Morocco, visited the Fez region on Thursday and Friday, reaffirming the US commitment to the country’s regional development.

Mr. During his visit, David Green reviewed a number of projects that “demonstrate how the Moroccan-US partnership supports the economic and civic development of this historic region,” according to a statement from the US Embassy in Morocco.

The embassy’s Charge de Affair met with Mozant Lancer, chairman of the Fez-Meknes Regional Council, the governor of Fez-Meknes region, Wally, Fez province, and education officials in particular. , To discuss how the United States works with Moroccan partners to create opportunities and jobs for business and youth, to invest in local populations through programs that promote education, civic engagement, entrepreneurial skills and private sector investment.

“I believe the region has a promising future as we emerge from the Covit-19 epidemic after experiencing exceptional bases in these two days,” David Green said in a statement, adding that “the United States is committed to supporting the long-term development of the region with close cooperation with Morocco.”

The focal point of the visit was the official launch of “Listen to My Voice”, a USAID program aimed at encouraging young people, women and people with disabilities to play a major role. Civic life is important, helping them to shape their communities and the development of the entire Fez-Meknes region. The project is being implemented by the Movement Alternative Citoens (ALCI) Association as part of a grant of 5.4 million dirhams (approximately 000,600,000).

The menu for Charge de Affair’s visit to the U.S. Embassy in Morocco included meetings with a variety of US-backed organizations and organizations.

As the United States and Morocco celebrate “200 years of friendship” throughout the current year, Mr. The U.S. embassy said David Green’s visit had taken place. Celebrating one year of cultural, economic and security federalism between the two countries, the two countries are celebrating the twentieth anniversary of the U.S. invasion of Tankier, the oldest diplomatic property in the United States.