Home Top News Joe Biden and Xi Jinping measure each other during a marathon exchange: “If we do nothing, they will crush us” 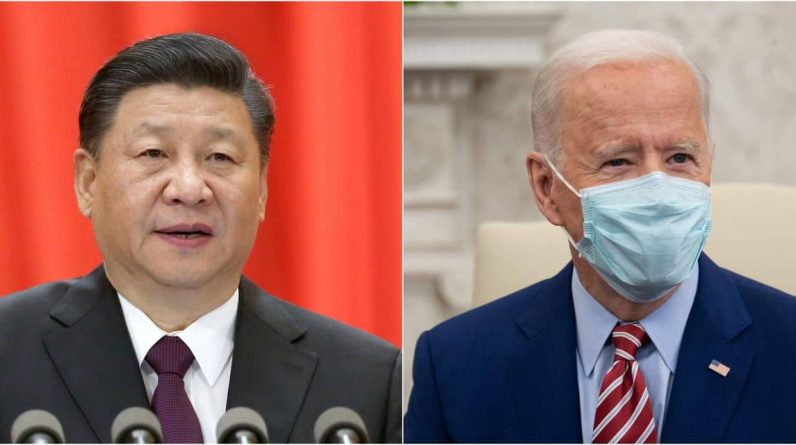 “Yesterday (Wednesday) evening, I spent two hours on the phone with Xi Jinping without any interruption,” the White House’s new tenant from the Oval Office on Thursday showed his willingness to stand firm against Beijing. “If we do nothing, they will crush us,” he added, at the end of an unusually long exchange between the leaders of the two leading world powers.

Hong Kong, Taiwan, Uyghur Muslim Minorities: According to the US executive, Joe Biden is sharper than Donald Trump on the important issues of the moment, expressing his “deep concerns” over the issue of human rights.

And, surprisingly, the answer of the strongest in Beijing is firm. According to the Chinese state media, Xi urged his US envoy to clarify the issues under “China’s sovereignty and territorial integrity.” “The United States must respect China’s fundamental interests and act with caution,” they said.

Since coming to power, Joe Biden and his team have repeatedly warned about the Uyghur issue. According to experts, more than a million of them are being held in political re-education camps in Xinjiang. This vast semi-desert area, especially bordering Pakistan and Afghanistan, is under police surveillance.

Beijing rejects the term “camps” and insists that they are vocational training centers that aim to provide employment for people and therefore exclude them from religious extremism.

The customs tax does not change

In a rhetoric used by the previous administration, Joe Biden also condemned Beijing’s “unjust and forced” economic practices, according to the White House.

If he had made clear his intention to overthrow Donald Trump’s foreign policy, US-China trade relations would have been, in essence, part of a continuum with his predecessor.

A senior executive, who did not want to be named, stressed that the new group shared with the former the desire to stand in support of Beijing in the “strategic rivalry” between the two major powers.

However, he identified the “real issues” in the way the Trump administration approached the contest. Cite the United States’ “weakness of alliances” or “the vacuum left in international institutions filled by China.”

The official reaffirmed on Wednesday that the tariff on Chinese products placed under President Trump is currently in effect and that a comprehensive review of US trade strategy is pending.

“We have not made a decision on this file,” he said. “There will be changes in our trade policy towards China, but they are not immediate. In the meantime, we have not eliminated tariffs,” he added, stressing the White House ‘s willingness to develop this strategy “in partnership with allies.”

In an interview aired on CBS on Sunday, Joe Bean warned that the rivalry between the United States and China would take the form of “intense rivalry”, while promising to avoid a “conflict” between the two countries.

When asked about his Chinese representative, he added: “He’s very tough. He’s not. I’m not saying this as a critique. It’s true, he does not have an ounce of democracy.

“I’m not going to handle this like Trump,” he added, adding that as Barack Obama’s vice president between 2009 and 2017, he was “well acquainted” with Xi Jinping.

During this first call, Joe Biden also asked for a more pragmatic approach to matters such as the climate that his predecessor ignored.

A U.S. official who spoke before the call between the two leaders said he did not want Joe Biden to discuss boycotting the planned Winter Olympics in Beijing in 2022.

U.S. elected officials introduced a draft resolution in the Senate in early February, asking the International Olympic Committee to withdraw the organization of the Olympics from China because of “blatant violations of human rights.”