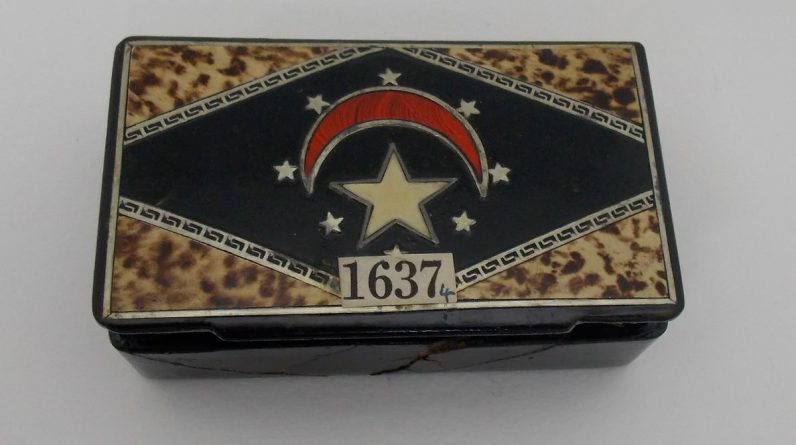 5,000-year-old artifacts taken from inside the Great Pyramid have been found in a cigar tank in a university collection.

In 1872, engineer Weinman Dixon discovered a piece of cedar wood in the Queen’s Room, one of three items recovered from the pyramids in Giza, Egypt.

Two of them – a ball and a hook – are now housed in the British Museum, but the piece of wood has been missing for more than a century.

In 2001, a record was found that a piece of wood may have been donated to the museum collections of the University of Aberdeen, but it was never classified and could not be found.

Archaeologists have unearthed a cigar with a former Egyptian flag, which does not appear to have belonged in the Asian collection, and after cross-referencing with other records, it has now been reduced to several pieces.

He said: “As soon as I examine the numbers in our Egyptian records, I immediately know what it is, and it is effectively hidden in the naked eye in a false collection.

“I was an archaeologist, working in excavations in Egypt, but I never thought it would be in northeastern Scotland, and I will find something very important to my own country’s heritage.

“It may be a small piece, it is now several pieces, but it is very significant that it is one of three items recovered from within the Great Pyramid.

“The university’s collection is huge – it’s running into hundreds of thousands of items – so looking for it is like finding a needle in a haystack. I could not believe it when I realized what’s inside this harmless looking cigar.”

Covid restrictions delayed the dating of the cedar strip, but recent returns show that it may date back to somewhere around 3341-3094 BC – about 500 years before historical records, when the Great Pyramid dates back to 2580 BC during the reign of Pharaoh Kufu.

This supports the notion that Dixon monuments were used during the construction of the Great Pyramid, and that they were not artifacts left by later room explorers.

The piece is thought to have been donated to the museum collections of the University of Aberdeen as a result of contacts between Dixon and James Grant, who studied medicine at the university, and went to Egypt in the mid-1860s to help with the cholera outbreak.

There, he befriended Dixon and assisted him in the exploration of the Great Pyramid, where they found the monuments.

Following Grant’s death in 1895, his collection was donated to the University, while a “five-inch piece of cedar” was donated to his daughter in 1946.

Neil Curtis, head of museums and special collections at the University of Aberdeen, said: “The discovery of the missing Dixon monument was amazing, but carbon dating was also a revelation.

“It simply came to our notice then. The date is related to the age of the tree, which may be from the center of the long-lived tree.

“Alternatively, it may be due to the rarity of trees in ancient Egypt, which means that the tree is in short supply, treasured and recycled or maintained for many years.

“This discovery certainly arouses interest in Dixon monuments, and how they might illuminate the Great Pyramid.”

Priest and writer Nesyamun has been silent for 3,000 years, but the remains of the mummy have been found on CD. After the scan was delivered the researchers created a 3-D printed version of his vocal cords.

See also  Eurostar is expanding its program between London and Paris