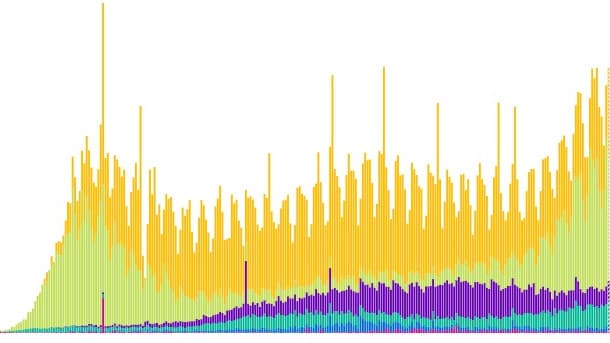 The corona virus kills one person every eight seconds worldwide.

The World Health Organization recorded 9989 new deaths Corona virus In the last 24 hours – yesterday became the third deadliest day since the onset of the epidemic.

In Europe, as cases are on the rise in many countries across the continent, the outlook is grim, and the WHO Europe director warned that one person is killed by the virus every 17 seconds.

Read this article in five minutes and browse some applications on your phone, 37 people have died from COVID-19 and another person is a few seconds away from losing their life.

On April 17, as the corona virus epidemic spread around the world, the death rate rose to its highest daily number, with 12,432 people killed in a single day.

The second deadliest day occurred on August 15, when 10,016 people were killed by the virus in a single day. Thursday marked the third deadliest day in a year since the virus appeared in the community.

One year after the first case of the virus was reported in Wuhan, China, more than 55 million people have been infected with COVID-19, and 1,344,003 million have died.

Related: Aussies that can prolong infection

How did we get here?

COVID-19 is a dangerous disease, but it is difficult to understand how the situation got out of control in many countries around the world.

In Europe, about 359,195 deaths have been reported. Of the 1.3 million corona virus deaths in the world, the numbers from those two regions are 1.04 million.

In Brazil and the United States, both countries have been plagued by conflicting approaches to dealing with the epidemic from leaders who continue to underestimate the severity of the virus and seek to undermine state-level locking orders.

President of the United States Donald Trump He has publicly criticized senior members of his own White House Corona virus task force and refused to wear the mask for months.

The president also publicly criticized the corona virus restrictions imposed by governors of Democratic-controlled states, calling for the “liberation of Minnesota!” Has tweeted that. “Liberate Michigan!” “Liberate Virginia!” During the heated anti-lock protests earlier this year.

Related: Did the corona virus make you nervous while traveling? you tell

The death toll from COVID-19 in the United States continues to rise. In the past week, the United States has reached two critical milestones: one million new cases in seven days, and a quarter of a million deaths from the virus.

As hospitals in many states are overburdened and medical staff are exhausted and overcrowded, the worsening situation is now expected to continue to escalate in the country.

In the United States, it is now being stressed that families should not travel to celebrate Thanksgiving by the Centers for Disease Control and Prevention as cases are on the rise across the country.

Brazil has more than 5.9 million cases of corona virus, and more than 166,000 deaths, according to the World Health Organization, making it the third worst affected country in the world after India and the United States. Brazilian President Jair Bolsanaro announced on July 7 that he would test positive for Covit-19, having previously dismissed the virus as “a little feverish”.

Within weeks of the positive test, Mr. Bolsanaro insisted on reopening businesses in violation of locking orders issued by some governors, and failed to name a health minister for his own government to help deal with the crisis in Brazil.

Hans Glக்ck, director of WHO Europe, has warned that Europe is facing a “tough” six months as the continent becomes the epicenter of the corona virus crisis again.

Mr Glck said the continent had recorded 29,000 deaths in the past week alone. However, he said the lockout across the continent would be useful as the number of new cases is starting to decline.

See also  In Tuscany, Renaissance-era wine windows are made for social distance: NPR

Speaking to reporters from Copenhagen, Mr Glck said: “Europe, along with the United States, is once again at the center of the epidemic.

“One person dies every 17 seconds,” he said of Europe’s statistics.

He noted the development of effective vaccines, but said that before they became widely available, it would be A tough time for the continent.

“There is light at the end of the tunnel, but it will be hard for six months,” Mr Glck said.