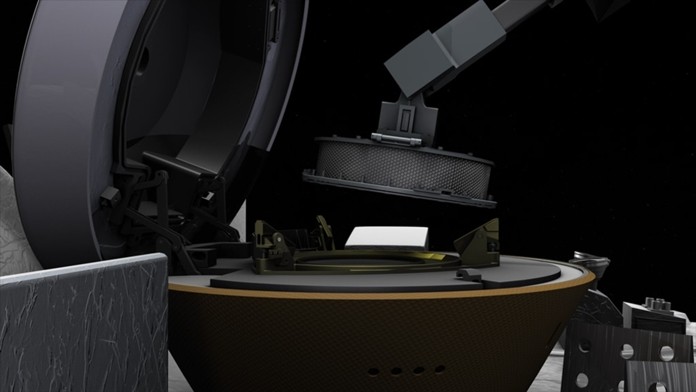 NASA’s OSIRIS-REx mission performed an initial store on Tuesday, Oct. 27, to provide as much protection and return as possible for the large sample collected from the surface of the asteroid Pennu.

On Oct. 22, the OSIRIRS-Rex Mission team fills the spacecraft’s collector’s head with materials collected from the surface of the pen – more than two ounces (60-g) of work is needed – and some of these particles The touch-and-sample model acquisition mechanism (TAGSAM) slowly escapes the collection head.

A mylar flap in the TAGSAM allows the material to easily enter the collector’s head and must be closed as soon as the particles have passed. However, large rocks that do not fully pass through the flap into the TAGSAM appear to open the flap, thus allowing bits of the sample to exit.

As the first sample collection event was so successful, NASA’s Directorate of Science Mission has proposed to the mission team to expedite the sample storage, originally scheduled for November 2, and in the spacecraft’s prototype return capsule (SRC) to minimize sample loss.

Dante Loretta, chief analyst at OSIRIRS-Rex at the University of Arizona in Duson, said: “The team is working around the clock to expedite the storage deadline so that this object can be secured as much as possible before returning to Earth.”

Unlike other spacecraft operations that run OSIRIS-REx automatically on a full line, storage of the model is done in stages and requires team supervision and input. The team sends preliminary commands to the spacecraft to begin the Stow line, and as OSIRIS-Rex completes each step in the line, the spacecraft returns the telemetry and images to the team on Earth and waits for the team to confirm to proceed with the next stage.

The signals currently take just over 18.5 minutes to travel one way between Earth and the spacecraft, so 37 minutes of communication is every step of the sequence factor of traffic time. Throughout the process, the mission team continues to evaluate Doxam’s wrist alignment to ensure that the collector’s head is properly placed in the SRC. A new imaging sequence has been added to monitor the escape material from the collector’s head and to ensure that no particles interfere with the storage process. The mission expects the entire storage process to take several days, at the end of which the spacecraft’s return to Earth model will be safely sealed in the SRC.

“I am proud of the amazing work of the OSIRIS-REx team and the success of this phase,” said Thomas Surbuchen, NASA’s Associate Scientist. “The mission is well-positioned to send a historic and substantial model back to an asteroid earth, and they are doing everything right on time to protect those precious cargo.”