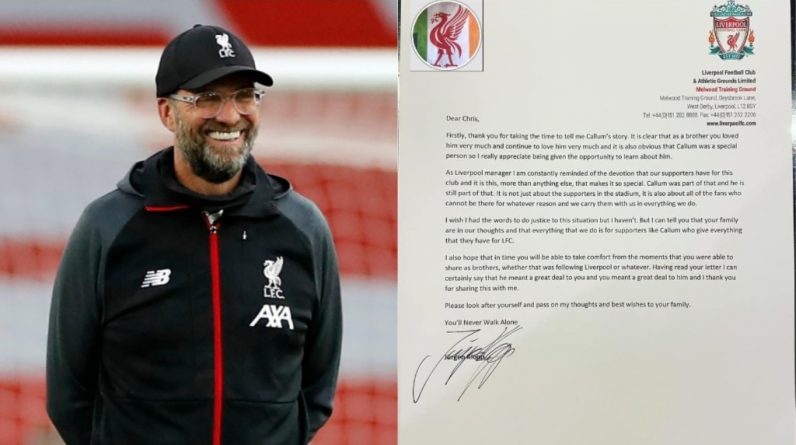 When the Reds manager learned of the fan’s young brother’s tragic period, he shared a letter written by an Irish Liverpool supporter Jன்rgen Klopp.

Chris Ryan, 25, a lifelong Liverpool fan, was delighted when the Merseyside club ended its 30-year wait for another league title last summer. However, Chris was overwhelmed by the tragedy of not being able to celebrate the victory with his brother.

Fellow Liverpool supporter died at the age of 12 from an asthma attack in 2017, in a sleepover with friends. His death devastated Ryan’s family.

Eager to honor his memory, Chris told Klopp the story of his siblings.

To his surprise and delight, the German responded with a letter from Ryan Irish Mirror He and his family will “be cherished forever.”

“With the current climate, with the corona virus and everything – he can make such a difference in one’s life by sitting down and doing something like that,” he said.

Writing in the letter, Globe, who personally addressed Chris, said: “It is clear that you loved him as a brother, and that you continue to love him very much, and that he was a special person for a long time, so I really appreciate the opportunity given to know about him.

“I wish I had the words to justify this situation, but I didn’t,” Klopp said.

“But I can tell you that your family is in our thoughts and that we do everything they have for the LFC for supporters like Kollam.

“I hope you can take comfort in the moments you’ve been able to share as brothers, no matter what, following Liverpool.”

Letter, a shared Irish Liverpool Supporters Group On Facebook, you can read here:

The full interview with Chris can be read in the Irish Mirror Here.