A new series of images sent to Earth by NASA’s Curiosity rover on Mars show a spinning ‘dust devil’ as it skirts across the surface of the Red Planet.

NASA Curiosity Rover has been moving across the Gale crater for the past eight years, conducting experiments and sending sending stunning still images to Earth.

Gale crater is going through its ‘windy season’, stirring up dust devils – caused by vortices of fast wind raising dust from the ground – captured by Curiosity.

According to NASA researchers, being able to study weather phenomena on Mars that we can also see on Earth can help us understand seasons on the Red Planet.

NASA hasn’t confirmed the size of the dust devil as it was too far away for accurate measurements, but orbiting spacecraft have seen some reaching 12 miles high. 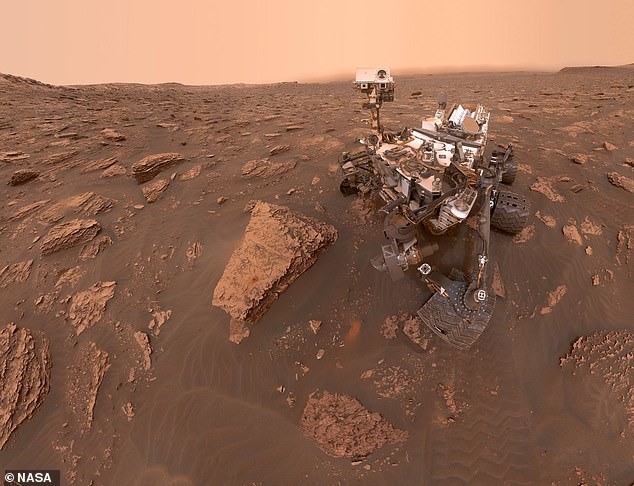 Top is a moving image shared by NASA showing the dust devil – highlighted with a red circle. Below is the Curiosity rover that sent the images of the spinning vortex back to Earth

It’s almost summer on Mars and because of this the surface of the Gale crater is heating up – this heating runs from early spring through to the Martian mid-summer.

When the surface warms enough, it causes convection and in turn vortices made up of fast winds that whip around low pressure cores – much like on Earth.

When the wind is strong enough – as has happened this year – they can pick up soil from the surface and create dust devils that can be seen across multiple still images sent back to Earth by the Curiosity rover.

‘We often have to process these images, by enhancing what’s changed between them, before dust devils clearly show up,’ wrote NASA scientist Claire Newman.

‘This dust devil was so impressive that – if you look closely – you can just see it moving to the right, at the border between the darker and lighter slopes, even in the raw images.’

Dust devils happen the same way on Earth as on Mars and form best when the terrain is relatively flat and dry and the air is warmer at the surface than above it.

They are actually very common on Mars – but actually seeing on in motion is rare as they are relatively short-lived and Curiosity only sends back still images.

We know about them because Curiosity and orbiting spacecraft have spotted the tracks these dust devils leave behind them – rather than one in motion.

To capture a dust devil movie the team had to get Curiosity to take a lot of images of the same region for between five and 30 minutes.

Then back on Earth the team worked to stitch the images together to creation a moving video that allowed them to track its path.

Monitoring their motion can provide information about a dust devil’s movement, where they initiate and how they evolve.

‘Looking at how fast they’re moving and in what direction also tells us about the background wind speed and direction at their location,’ said Newman.

‘We also made sure to take meteorological measurements with throughout each movie, in case we image a vortex that’s close enough for us to also measure its pressure drop, impact on local temperatures, or even UV radiation if it’s dusty enough to partially block out the Sun.’ 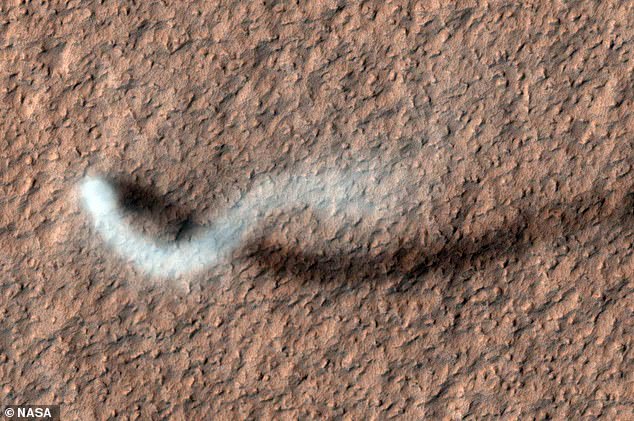 NASA has captured images of spinning dust devils on the Red Planet from space – but this is a still image rather than showing it in motion. This one reached 12 miles high 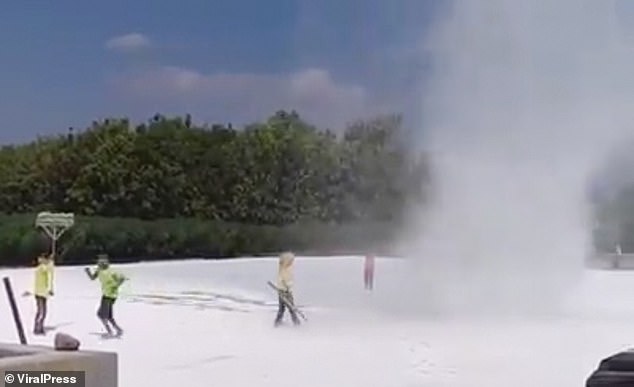 Dust devils also form on Earth. This is the moment a team of workers in Java, Indonesia, tried to ‘kill’ one with tools after it started wreaking havoc in the flour at a food processing plant

Monitoring dust devils isn’t the primary mission of the atmospheric team, their goal is to drill and sample material as part of a ‘wet chemistry’ experiment.

This involves transforming less volatile organic chemistry into forms that can be detected by the equipment onboard the Curiosity rover.

While drilling and checking the samples, cameras on Curiosity could be used to monitor and capture images of the dust devil.

They also examined the dust seen above the rover in the crater.

‘The dust measurements will help us to track the regional dust activity on Mars that has been seen from the surface and orbit in recent years,’ Newman wrote.

Curiosity is currently the only moving rover on the Red Planet, but Perseverance is currently in flight between the worlds and is due to land on Mars early in 2021.

Full details of the discovery can be found on the NASA Mars Mission updates blog.

The Mars Curiosity rover was initially launched from Cape Canaveral, an American Air Force station in Florida on November 26, 2011.

It was launched on the Mars Science Laboratory (MSL) spacecraft and the rover constituted 23 per cent of the mass of the total mission. 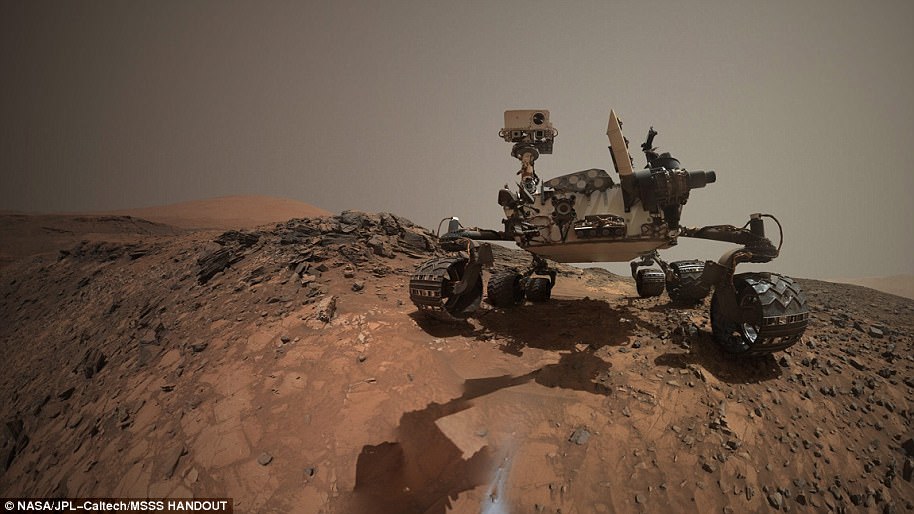 The Mars curiosity rover was initially intended to be a two-year mission to gather information to help answer if the planet could support life, has liquid water, study the climate and the geology of Mars an has since been active for more than 2,000  days

The rover was initially intended to be a two-year mission to gather information to help answer if the planet could support life, has liquid water, study the climate and the geology of Mars.

Due to its success, the mission has been extended indefinitely and has now been active for over 2,000 days.

The rover has several scientific instruments on board, including the mastcam which consists of two cameras and can take high-resolution images and videos in real colour.

So far on the journey of the car-sized robot it has encountered an ancient streambed where liquid water used to flow, not long after it also discovered that billions of years ago, a nearby area known as Yellowknife Bay was part of a lake that could have supported microbial life.