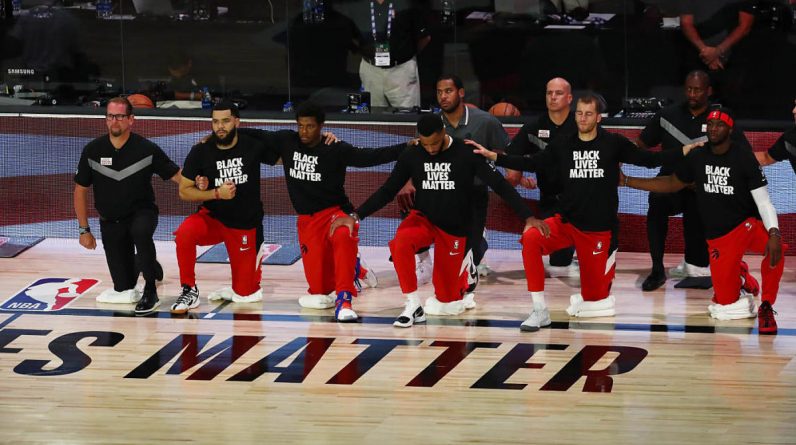 When NBA players decided to play out the rest of the 2019-20 season in Orlando, they made a point to inform the league that they wanted the focal point to remain on social justice, police brutality and the Black Lives Matter movement. Since being at Disney World, players have used their media availability to bring justice for Breonna Taylor, who was shot and killed in Louisville after police officers issued a no-knock warrant.

The NBA has pledged to donate money to organizations that directly serve Black communities. TV commercials have played during games calling for equality. Players like Patty Mills and Jrue Holiday donated their entire salaries to social justice causes and to serve the Black business community. LeBron James started a voting rights group with other athletes, aimed at combating voter suppression in the Black community.

The focal point has remained on social justice. However, the latest police shooting of an unarmed Black man named Jacob Blake, who was shot seven times in the back in Kenosha, Wisconsin on Sunday, has been weighing heavily on the minds of the players and coaches within the NBA bubble. So much so, in fact, that players from the Toronto Raptors and Boston Celtics are having discussions to potentially boycott Game 1 of the Eastern Conference semifinals on Thursday. The players met on Tuesday night in their hotel to weigh their options and will do so again on Wednesday night, according to Adrian Wojnarowski and Marc J. Spears.

Raptors guard Fred VanVleet spoke to the media on Tuesday and discussed what he and his teammates have been thinking about.

“We knew coming here or not coming here was not going to stop anything, but I think ultimately playing or not playing puts pressure on somebody.

So, for example, this happened in Kenosha, Wisconsin, if I’m correct? Would it be nice if, in a perfect world, we all say we’re not playing, and the owner of the Milwaukee Bucks — that’s going to trickle down. If he steps up to the plate and puts pressure on the district attorney’s office, and state’s attorney, and governors, and politicians there to make real change and get some justice.

I know it’s not that simple. But, at the end of the day, if we’re gonna sit here and talk about making change, then at some point we’re gonna have to put our nuts on the line and actually put something up to lose, rather than just money or visibility. I’m just over the media aspect of it. It’s sensationalized, we talk about it every day, that’s all we see, but it just feels like a big pacifier to me.”

While VanVleet declined to go into details about how the Raptors will respond to the shooting of Blake, who per his attorney is paralyzed from the neck down, the star guard did say many options were being discussed.

See also  With the frogs in London, everyone goes to Gokot

“I’ll keep that between our team,” VanVleet said. “We’re dealing with it in real time, and I think it affects everybody differently. It’s pretty fresh on my mind, and I’m sitting in front of a camera, so I’m just speaking as I’m going. But, yeah, there’s a lot of different things that we’ve discussed.”

Raptors coach Nick Nurse went on ESPN Radio and said that boycotting Game 1 is something the team has talked about, but haven’t made any decisions on.

“We’re listening to them. I think our president Masai Ujiri and myself during a lot of this have opened the floor to these guys and had several meetings just as an open forum to get their thoughts, feelings and ideas out there on the table,” Nurse said. “Fred VanVleet, Norman Powell and Kyle Lowry mentioned yesterday in our meeting that this was something they wanted to explore and talk about and we’re going to meet here shortly so we’ll have more info in a bit but we’re going to listen to them.”

Raptors All-Star point guard Kyle Lowry also told ESPN’s Jay Williams via text that the team is “exploring anything and everything” in response to what the team’s stance is on boycotting the game. Nurse addressed the media on Wednesday to reiterate that everything is on the table, and even some players have expressed their desire to leave the bubble and go home:

“I don’t think I can probably put a percentage on it or anything,” Nurse said. “I think that, again, it’s ongoing discussions. I think it is on the table. You know, there’s some other ideas on the table as well. I don’t know.”

Although the Celtics have held team meetings to discuss the shooting of Jacob Blake, coach Brad Stevens said that no one has expressed that they didn’t want to play. Celtics forward Marcus Smart did say that something else needs to be done beyond the kneeling for the national anthem and wearing t-shirts.

“We tried to be peaceful, kneeling, we tried to protest,” Smart said. “And for us, we tried to come out here and get together and play this game and try to get our voice across. But it’s not working, so obviously something has to be done. Right now, our focus shouldn’t really be on basketball. I understand it’s the playoffs and everything like that, but we still have a bigger underlying issue that’s going on, and the things that we’ve tried haven’t been working. So we definitely need to take a different approach, and we definitely need to try new things out to get this thing working the way that we know it should and get our voices heard even more.”

Other coaches and players around the league have expressed their disgust and overall sadness of the shooting of Blake, and while the NBA has agreed to make the focal point of the season’s return on social justice issues, there’s only so much these players can do while in a bubble away from the real world. For now, though, while the NBA season carries on, the players will continue to find new ways to enact real, tangible change. Whether that means boycotting games to send a message remains to be seen, but it is something that the league will have to be prepared for if teams and players do begin to make that decision.