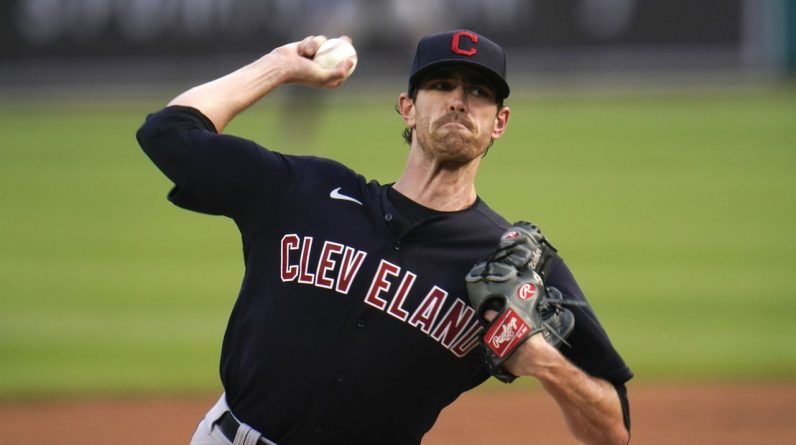 CLEVELAND, Ohio — The strikeouts continue for Shane Bieber. So does the Indians’ hold over the Detroit Tigers.

Bieber struck out 11 in seven innings Saturday night as the Indians beat Detroit, 3-1, at Comerica Park. The Indians have beaten the Tigers 19 straight times since April 11, 2019. It is their longest winning streak over one team in franchise history.

For reference’s sake, the Indians and Tigers are charter members of the American League. They’ve been playing each other since 1901. The Tigers still hold the all-time series lead even though the Indians have gone 60-17 against them since 2016.

The 54 strikeouts are the most in team history after the first five starts of the season. They are tied for the third most in the big leagues since 1906 behind Nolan Ryan at 59 and Randy Johnson with 55. Bieber is tied with Ryan and Pedro Martinez.

In seven innings, Bieber used every pitch in his arsenal. He threw 26 curves, 25 four-seam fastballs, 21 cutters, 17 sliders and nine changeups. He pitched between 95.6 mph and 81.3 mph, according to baseballsavant.com

“He has the ability to throw any pitch at any spot in the count,” said Indians manager Terry Francona. “He’s got enough fastball to get it by you. I don’t think I’ve ever seen this with a pitcher. He’s got a curveball and slider that are almost the identical speed, they just have a different break.”

Spencer Turnbull (2-1, 2.78) continued to have his problems with the Indians. They went 5-0 against him last season in seven games. In his first start against the Indians this year, Turnbull lasted 4 2/3 innings, allowing three runs on six hits. He drove his pitch count up with four walks, three of which turned into runs.

Bieber registered 10 of his 11 strikeouts in a 13-batter stretch from the second inning through the fifth. The stretch also included his only walk of the game. He is 4-1 with a 0.83 ERA in his career against Detroit. Bieber has walked six batters this season.

Bieber said he didn’t know the Indians have had that much success against the Tigers.

“I had no idea it was like that,” said Bieber. “I saw a Tweet on Friday. I was just trying to keep it going. . .I feel we’re going to go out there tomorrow and finish the job.”

Nick Wittgren and Brad Hand finished the last two innings. Hand recorded his fifth save after allowing a pinch-hit RBI double to JaCoby Jones with two out in the ninth.

The Indians took a 2-0 lead in the third on Jose Ramirez’s two-run double to right. The inning was set in motion by Turnbull, who walked Sandy Leon and Oscar Mercado, the eighth and ninth hitters, to start the inning. Cesar Hernandez loaded the bases with a bunt single and Ramirez delivered Leon and Mercado.

A big inning was sitting on a tee for the Indians. There were no outs and the top of the order was batting. Turnbull, however, struck out Francisco Lindor, walked Carlos Santana to reload the bases and induced hot-hitting Franmil Reyes to hit into a 6-4-3 double play.

The Indians made it 3-0 in the fifth and Ramirez played a big part in that run as well. He worked Turnbull for a walk, stole second and scored on Santana’s double to left center. It was Ramirez’s second steal of the game.

“I feel running the bases is part of my game,” said Ramirez, through interpreter Agustin Rivero. “I always like to run the bases, being aggressive, but at the same time being smart.”

The Indians opened this three-game series with a 10-5 win over Detroit on Friday. They had chance for another big offensive night on Saturday,, but they went 3-for-14 with runners in scoring position and left eight runners on base. Lindor went 0-for-5, stranding six runners.

In the eighth, they loaded the bases with no one out, but couldn’t score.

New Indians face masks for sale: Here’s where you can buy Cleveland Indians-themed face coverings for coronavirus protection, including a single mask ($14.99) and a 3-pack ($24.99). All MLB proceeds donated to charity.

Is there a magic cure for the Cleveland Indians’ anemic offense? (podcast)