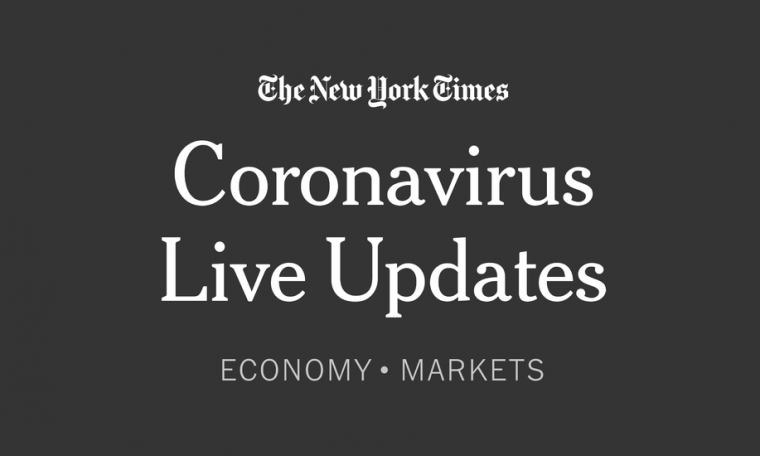 Here’s what you need to know:

Economists surveyed by FactSet expect the Commerce Department to report that U.S. gross domestic product fell by more than 10 percent in the second quarter of the year. That would translate to a 34.6 percent annual rate of decline.

If the actual number even approaches those forecasts, it would represent a collapse of breathtaking speed and severity. By comparison, economic output fell 4 percent during the entirety of the Great Recession a decade ago — and took 18 months to get there.

“Never have we seen such large declines in activity at such a rapid pace,” said Gregory Daco, chief U.S. economist for Oxford Economics.

In response to the crisis, Congress pumped trillions of dollars into the economy. The plan worked at first: After plunging in March and April, spending and employment rebounded in May and June.

In recent weeks, however, cases of the virus have surged in much of the country. Data from public and private sources indicate a pullback in economic activity, reflecting consumer unease and renewed shutdowns.

“In another world, a sharp drop in activity would have been just a good, necessary blip while we addressed the virus,” said Heather Boushey, president of the Washington Center for Equitable Growth, a progressive think tank. “From where we sit in July, we know that this wasn’t just a short-term blip.”

A fresh snapshot of the job market will arrive Thursday morning as the Labor Department reports the latest weekly data on initial claims for unemployment benefits.

Economists are expecting the tally of new state unemployment claims filed last week to total 1.43 million, about the same as the week before.

Claims rose the previous week after nearly four months of declines, signaling the economic toll brought by a resurgence of the coronavirus in many parts of the country.

“Even if it doesn’t keep rising, we’re still in a desperate situation,” said Diane Swonk, chief economist at the accounting firm Grant Thornton in Chicago. Noting that claims were in the 200,000 range before the pandemic forced widespread shutdowns in March, she added, “This is unique in terms of the speed and magnitude of the job losses.”

What’s more, fears are growing that after rebounding strongly in May and June, the economy has run out of steam with many states reversing the reopening of businesses.

At the same time, the $600 supplemental weekly unemployment payment from the federal government is ending, a potentially crippling financial blow to millions.

“Everyone wants to keep putting on rose-colored glasses, but it’s blinding us to the reality of the situation and what we have to deal with,” Ms. Swonk said.

The German economy shrank 10.1 percent from April through June compared to the previous quarter, the biggest decline since the government starting keeping the data in 1970.

See also  Will Google Analytics be banned in Europe soon? Beware of shortcuts

But the figure, which covers the peak period of pandemic lockdowns, may already be old news. Surveys of business managers indicate that Germany’s largest economy is rebounding quickly, though it will probably be months or years before growth returns to normal, and the risk of further setbacks is high.

The German labor market stabilized in July, according to data published Thursday by the nation’s labor office. The number of unemployed people fell by 18,000 after rising sharply from April through June. But joblessness could rise later in the year if many businesses founder, and workers who are now on furlough become unemployed.

Germany is in a better position than other European Union countries like Italy or Spain, in part because the government was effective in containing the spread. At the same time, new infections of the coronavirus are rising again as Germans return from holidays abroad, and there is fear of a second wave.

The pandemic has left deep scars on the German economy even if the pain is less severe than in many other countries, including the United States.

About 7 million people in Germany are on government-subsidized paid furloughs, and not all will get their jobs back. Companies like the automaker Daimler and Deutsche Bank are cutting their workforces permanently in response to changes in their industries that go beyond the pandemic.

Global stock markets declined on Thursday, a day after the U.S. Federal Reserve chief gave a sobering prediction of a long road ahead for economic recovery, and as investors awaited some potentially grim data on U.S. business activity and unemployment.

European markets were about 2 percent lower in late morning trading, after a mostly downbeat day for Asian stocks. Futures on Wall Street predicted to fall of about 1 percent when trading starts later in the day.

Elsewhere, the price of U.S. 10 year Treasury notes were rising, a sign of higher demand for safe investments, and oil futures dropped by about 1.5 percent. Gold slipped further from a record reached earlier in the week.

Two fresh readings on the state of the U.S. economy will be released on Thursday: the initial estimate of economic growth in the 2nd quarter, and the latest tally of first-time claims for unemployment insurance. The figure on gross domestic product, which will cover the April-June period when most of the nation was under lockdown, is expected to show a historic contraction in economic activity. On the jobs side, the number of unemployment claims is expected be about 1.4 million, about the same as the week before, but still a number that would be alarmingly high in any normal time.

Earlier Thursday, data from Germany showed that Europe’s largest economy shrank 10.1 percent from April through June compared to the previous quarter, the biggest decline since the government starting keeping the data in 1970.

The data will come a day after Jerome H. Powell, the Fed chair, told reporters that the “pace of recovery looks like it has slowed,” pointing to debit and credit card spending and hiring trends. He added, “The path forward for the economy is extraordinarily uncertain and will depend in large part on our success in keeping the virus in check.”

Stock prices on Wall Street rose after his comments, as investors seemed heartened by the Fed’s commitment to keep looking for ways to bolster the economy.

The way the numbers are presented may sow confusion when the Commerce Department on Thursday morning releases its preliminary estimate of second-quarter gross domestic product. Ben Casselman explains how to understand the number:

Forecasters expect the report to show that G.D.P. fell at an annual rate of about 35 percent in the second quarter. If you don’t follow economic data closely (or maybe even if you do), you might have read that as saying output fell by more than a third in just three months. But that would be wrong.

In the United States, G.D.P. isn’t reported as a simple change from one quarter to the next. It’s reported as an annual rate. (Technically a seasonally adjusted annual rate.) Think of it this way: If this rate of change held steady, this is how much G.D.P. would grow or shrink over a full year.

A negative 35 percent annual growth rate would mean economic output was 10.2 percent smaller in the second quarter than in the first. (It’s not as simple as dividing the annual rate by four, because growth rates compound.)

Looking at things on an annualized basis can be useful, because it makes it easy to compare data collected over different time periods. You’ve probably done a version of this calculation yourself! “OK, if I cut out my $4 daily latte, that would save me $1,000 a year.”

But when annual rates get applied to short-term or one-off changes, they can be misleading.

Right now, the economy is experiencing a lot of short-term swings. The developments are real and important — but it doesn’t make much sense to annualize them.

For that reason, in our coverage tomorrow, The Times plans to emphasize the simple, nonannualized change from the first quarter to the second. We’ll still give the annualized number for those used to seeing it that way, plus other numbers as relevant, such as year-over-year change.

This approach will make the second quarter change look milder than if we had used the annualized figure. We plan to do the same thing next quarter, when it will (presumably) make the rebound look smaller. But in both cases, we believe it will more clearly communicate what is happening in the economy.

Strong sales in China helped Huawei edge out Samsung to become the world’s biggest smartphone vendor in the second quarter, according to the research firm Canalys — a milestone for the embattled Chinese tech giant.

Distrust of Huawei’s products is rising all around the world. The Trump administration, concerned that the Chinese government might use Huawei gear to disrupt telecommunications networks, has restricted the company’s access to American technology.

And Britain this month said it would bar Huawei equipment from the country’s 5G mobile networks. Other governments have mulled similar moves.

Huawei has doubled down on the Chinese market in response, a strategy that has paid off during the pandemic. China’s economy is recovering more quickly than others, helping Huawei sell 55.8 million handsets between April and June, according to Canalys. Samsung sold 53.7 million devices.

Samsung has for years been the world’s largest smartphone seller. But its major markets, including the United States, Europe and Brazil, are deeper in the coronavirus-related economic doldrums.

“This is a remarkable result that few people would have predicted a year ago,” said Ben Stanton, a Canalys analyst. “If it wasn’t for Covid-19, it wouldn’t have happened.”

PARIS — French carmaker Renault posted a record net loss Thursday of 7.3 billion euros ($8.58 billion) in the first half of the year, as layoffs mounted at its global operations amid rising economic hardship from the coronavirus pandemic.

The bulk of Renault’s losses came from Nissan, Renault’s partner in a global automaking alliance, which this week warned it was facing its weakest sales in a decade and operating losses for the year of over $4 billion. Without Nissan’s negative contribution to the alliance, Renault’s losses were at €2 billion, down from €1.5 billion a year ago.

Global carmakers have been slammed by the pandemic, and Renault is among many looking to streamline operations to adjust to the economic downturn.

In the European Union, Renault’s most important market, its sales plunged 80 percent in April amid nationwide quarantines. The company has taken a €5 billion financial aid package from the French government, and announced plans to pull out of China and curb global production sharply to face what it called a “major crisis facing the automotive industry.”

Despite the government support, Renault said in May that it would cut nearly 15,000 jobs worldwide, or about 8 percent of its work force.

The pain is already mounting in countries where Renault operates: Around 7,000 Brazilian autoworkers went on strike earlier this week after Renault announced it would fire 747 people at its plant São José dos Pinhais in the southern state of Paraná, following the termination of 300 temporary workers.